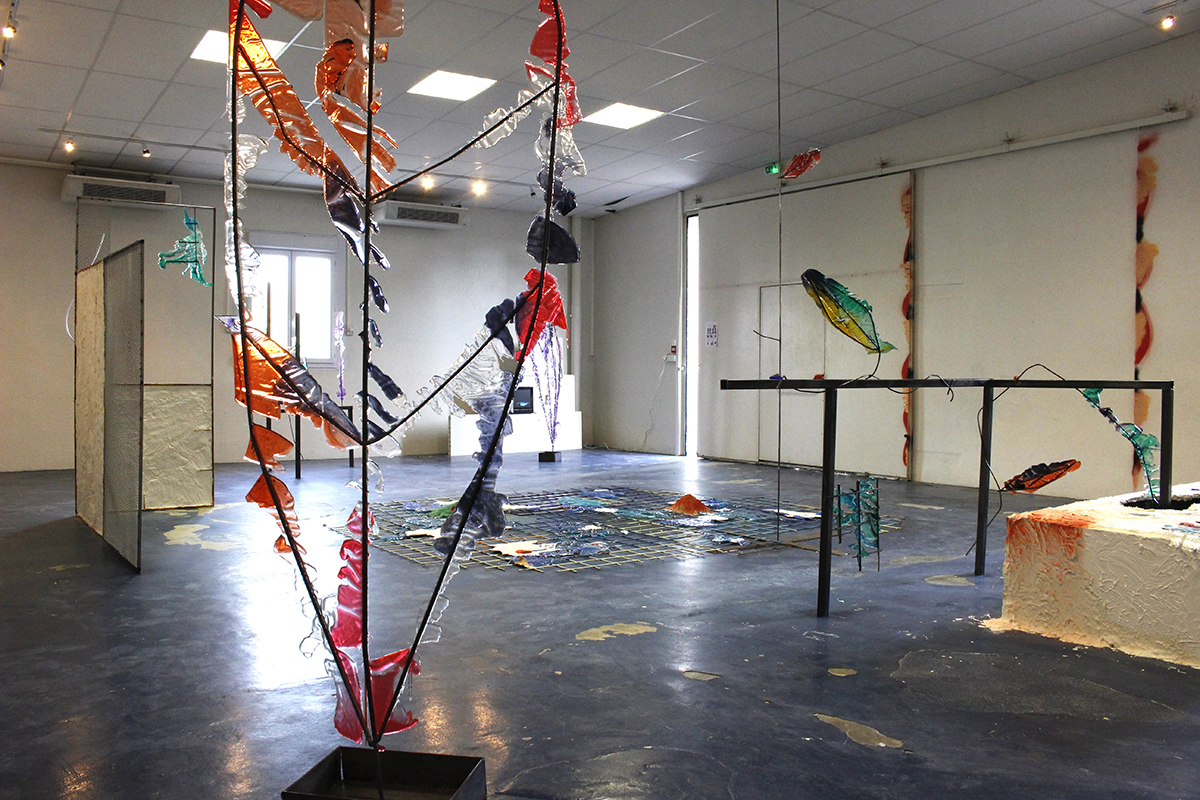 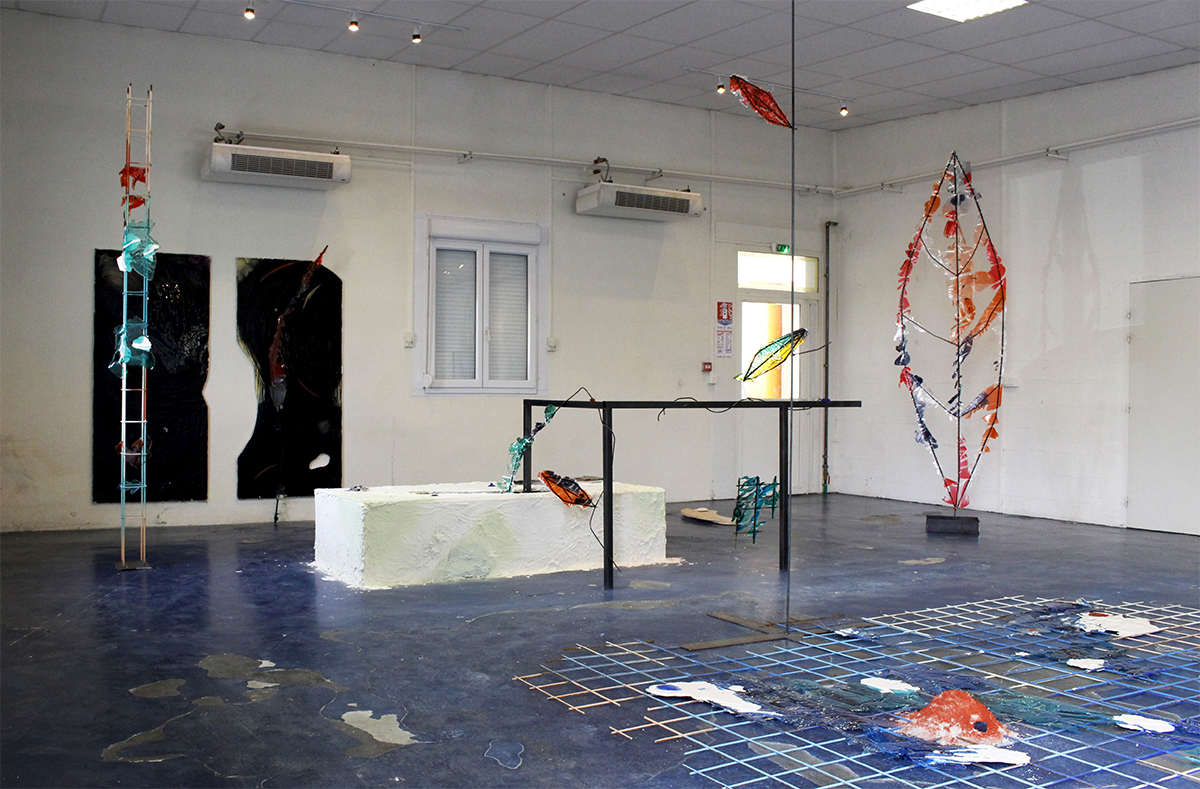 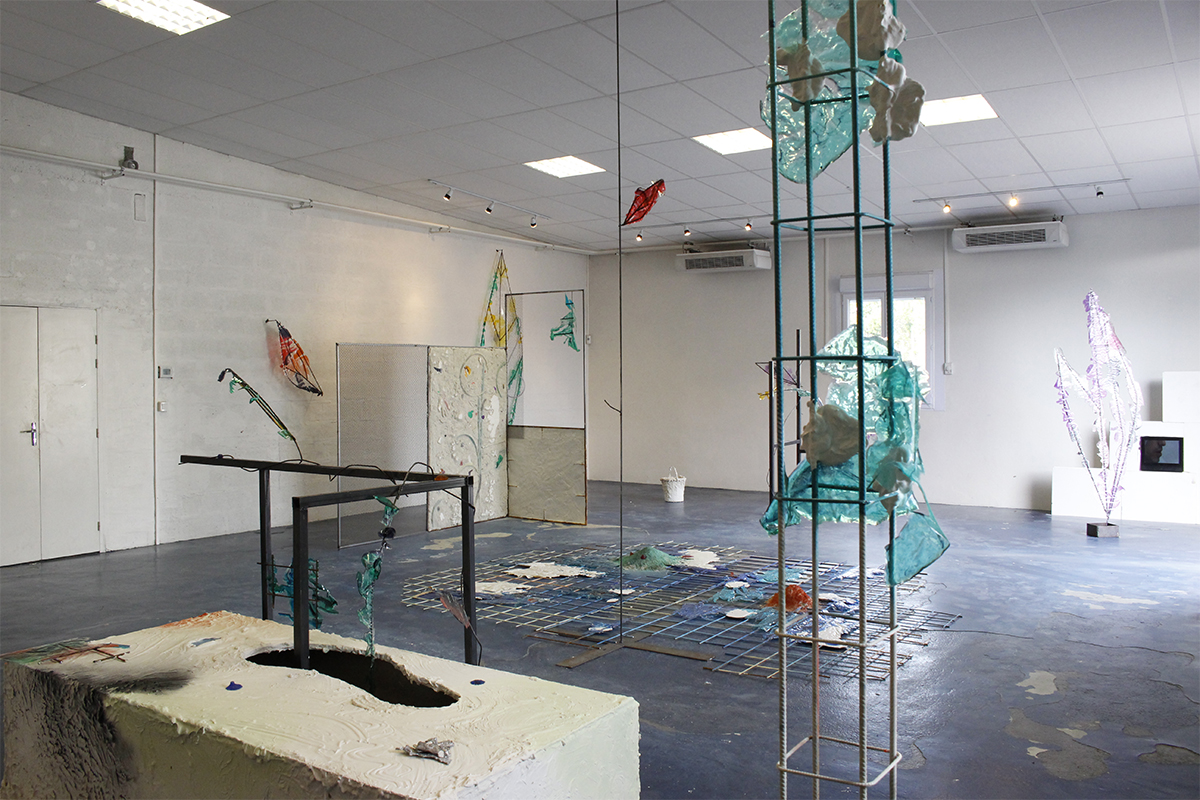 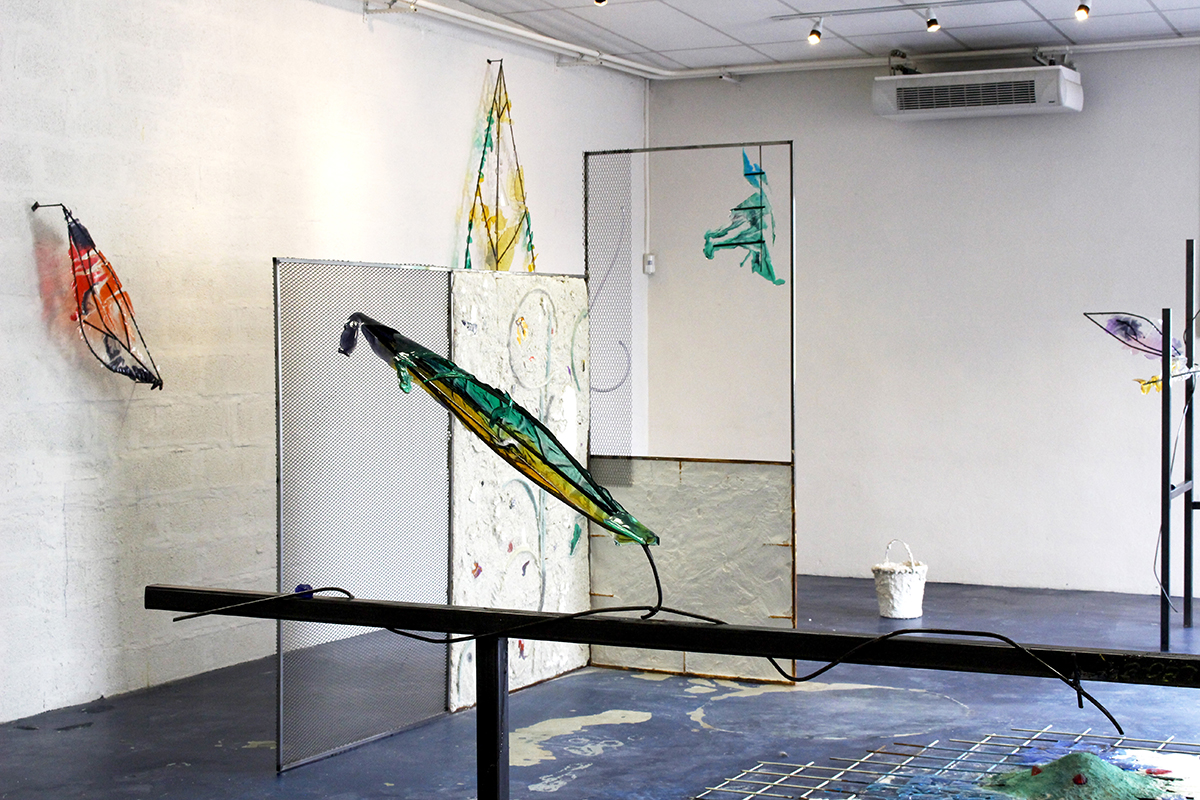 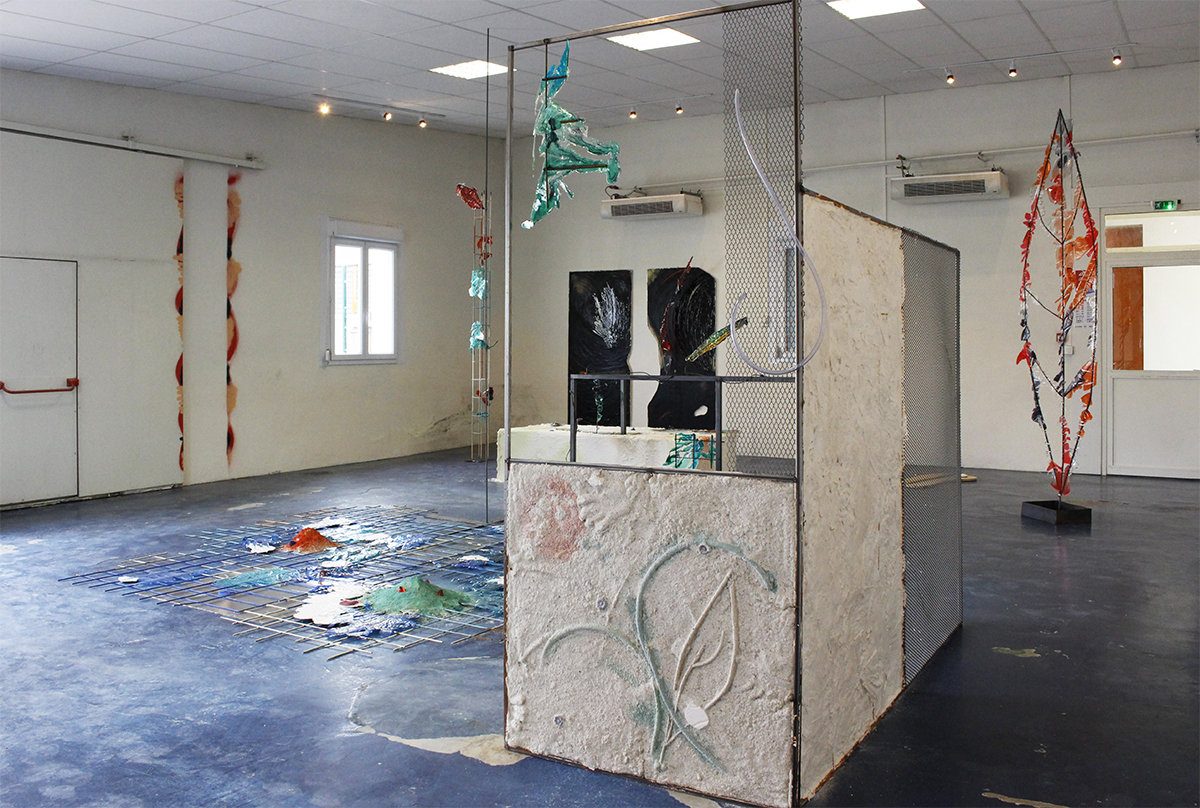 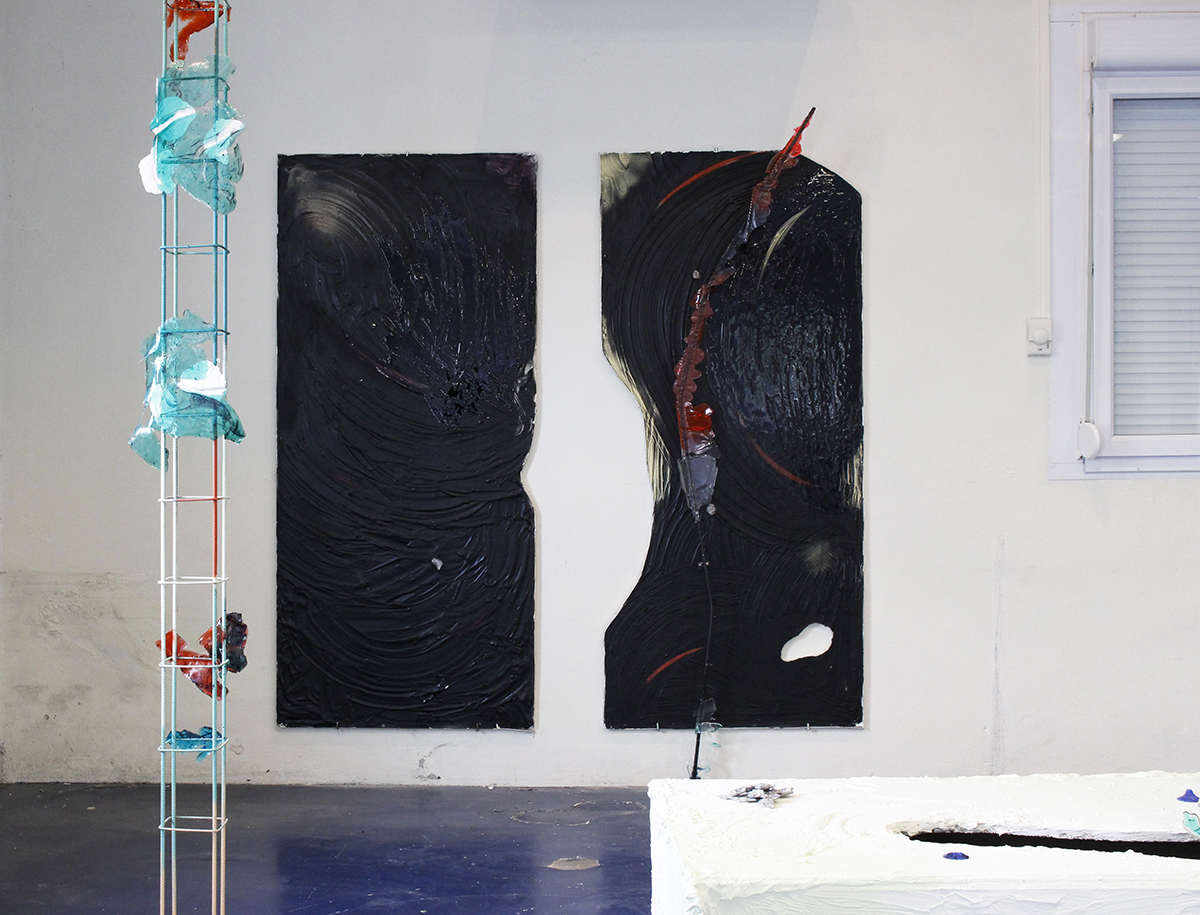 Romain Vicari is endlessly wandering through, exploring, and hunting around in abandoned urban areas, be they industrial wastelands or building sites. Methodically he observes and studies them, takes samples. His curiosity piqued, he approaches the traces of an industry and a space undergoing an urban transition in order to extract from them material vestiges that he views as artifacts. Whether he is working directly on site or recreating a topography within the walls of an exhibition venue, the materials he employs recall these spaces and the practices associated with them, between the building trades and street art, i.e., resin, cans of spray paint, plaster, concrete, metal frameworks, the remains of construction sites, urban scrap.

Shifting his sculptural experiments which began in the context of the street or construction site to the smoother, more closed context of the exhibition venue, Vicari creates colorful, monumental installations that call into question our perception of certain spaces and revel their transitory, changing character. Indeed, his use of imposing screens or more discrete forms throughout a space modifies viewers’ perspectives while sketching out relief images of urban ruins. This form of the decontextualized fake also raises the question of meaning. That is, fashioned from these transformed, combined and reappropriated elements, his productions take on a different character and their meaning becomes sketchier, less clear. They attain an almost decorative dimension through the conscious arrangement of the elements.

Vicari creates a disconnect that is all the more powerful by taking over the gallery space of the Collège Le Rimorin of Dornes, which is located in a rural zone, with installations that have a decisively urban character. The venue itself testifies to a decontextualization, appearing as a gym, hangar, exhibition venue, or classroom depending on its form or use. For “My Third Eye,” Vicari has appropriated the place, literally by sampling bits of the ground, and figuratively by lending the space new dimensions that are simultaneously urban, speculative, and even mystical. From his Brazilian roots Vicari has inherited a propensity for cultural reappropriation. The artist fashions a digest of art history and urban space as a token of our civilization, which he views through the prism of literary, scientific and philosophical references. The third eye mentioned in the title refers to shamanism, which is still very much alive among indigenous peoples of the Amazon, and presupposes an openness and heightened awareness of the immediate environment and possible interactions with it. It adds an introspective, psychedelic dimension to the exhibition while laying the ground work for a possible form of perception of future shamans upon the ruins of an industrial civilization, left behind by a humanity that has set off to colonize some cosmic elsewhere. The artist proposes a world seen by the specter of his third eye, inviting viewers to open up and take in this artistic proposal and stroll among feathered serpents, screens, paintings and other suspended works.