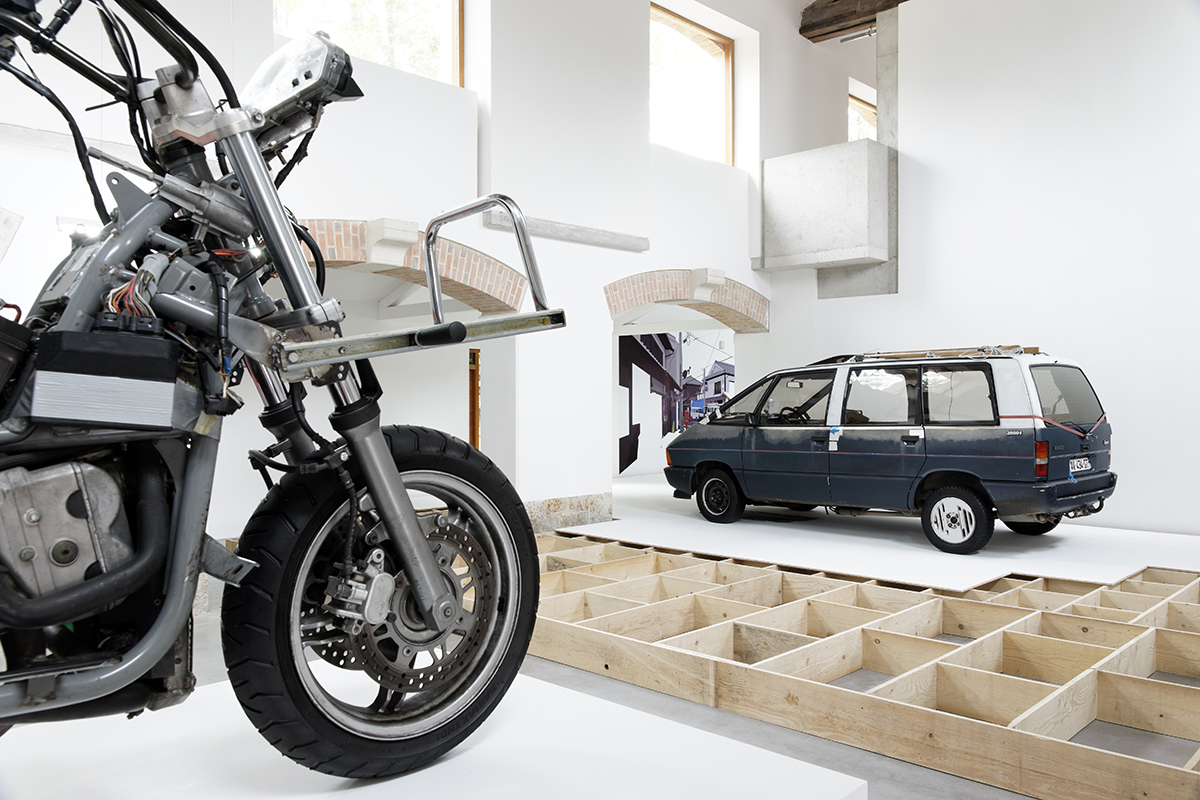 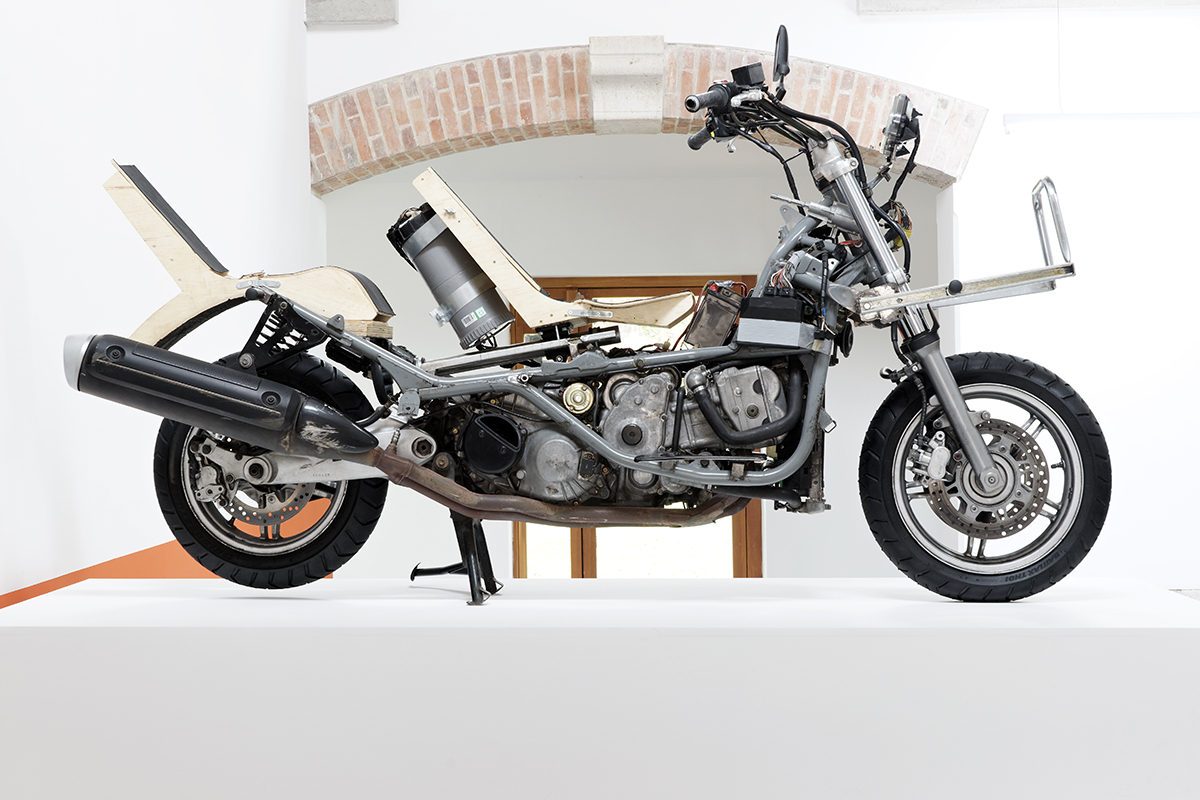 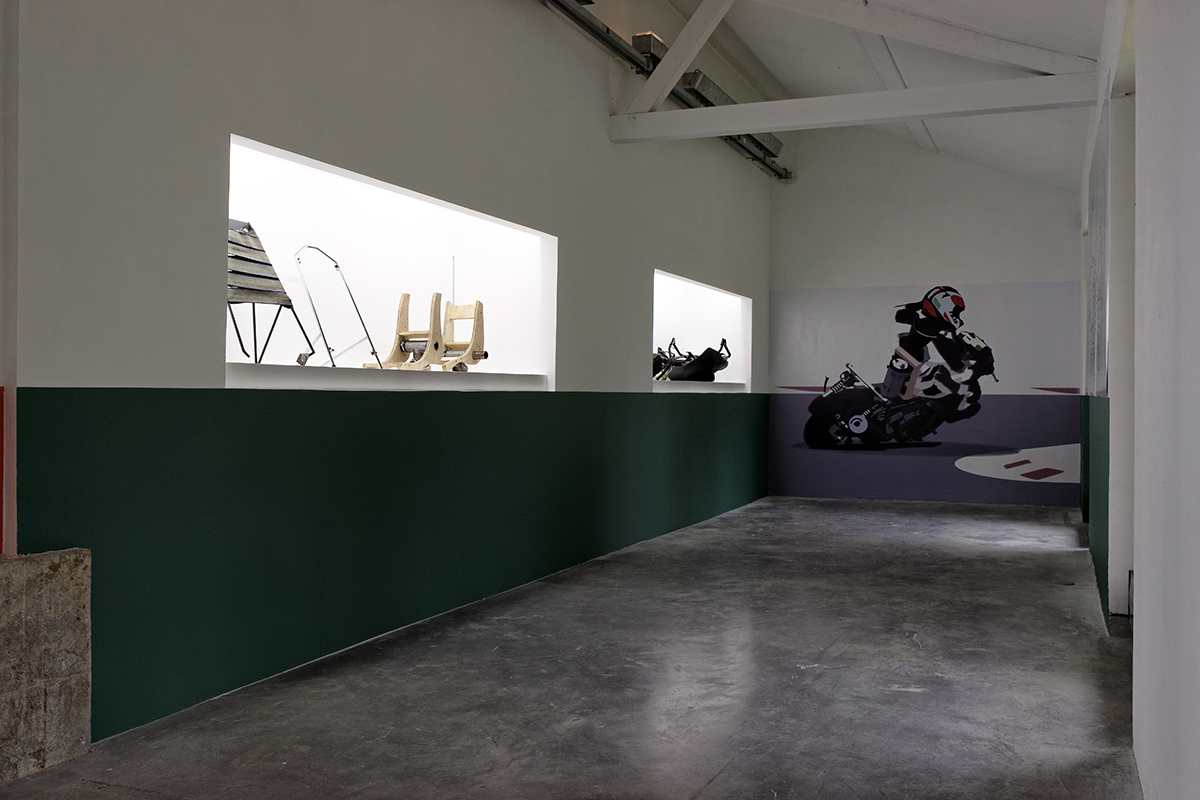 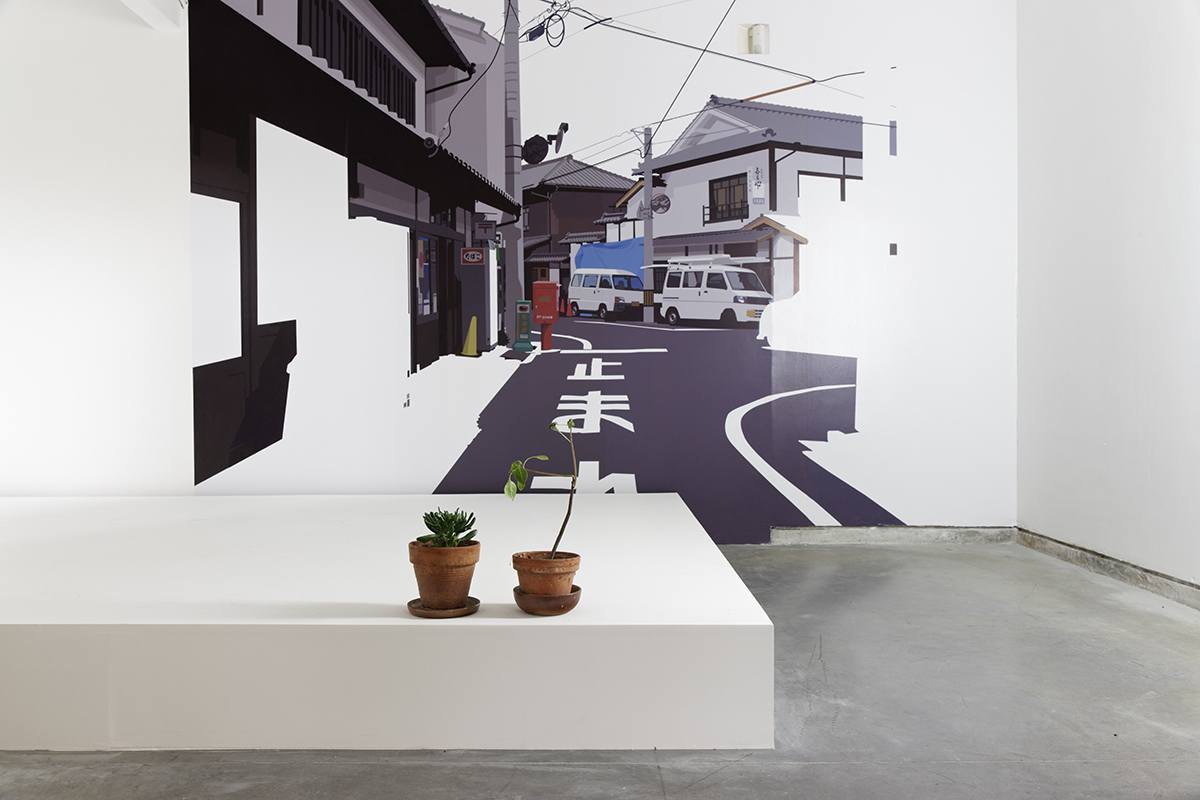 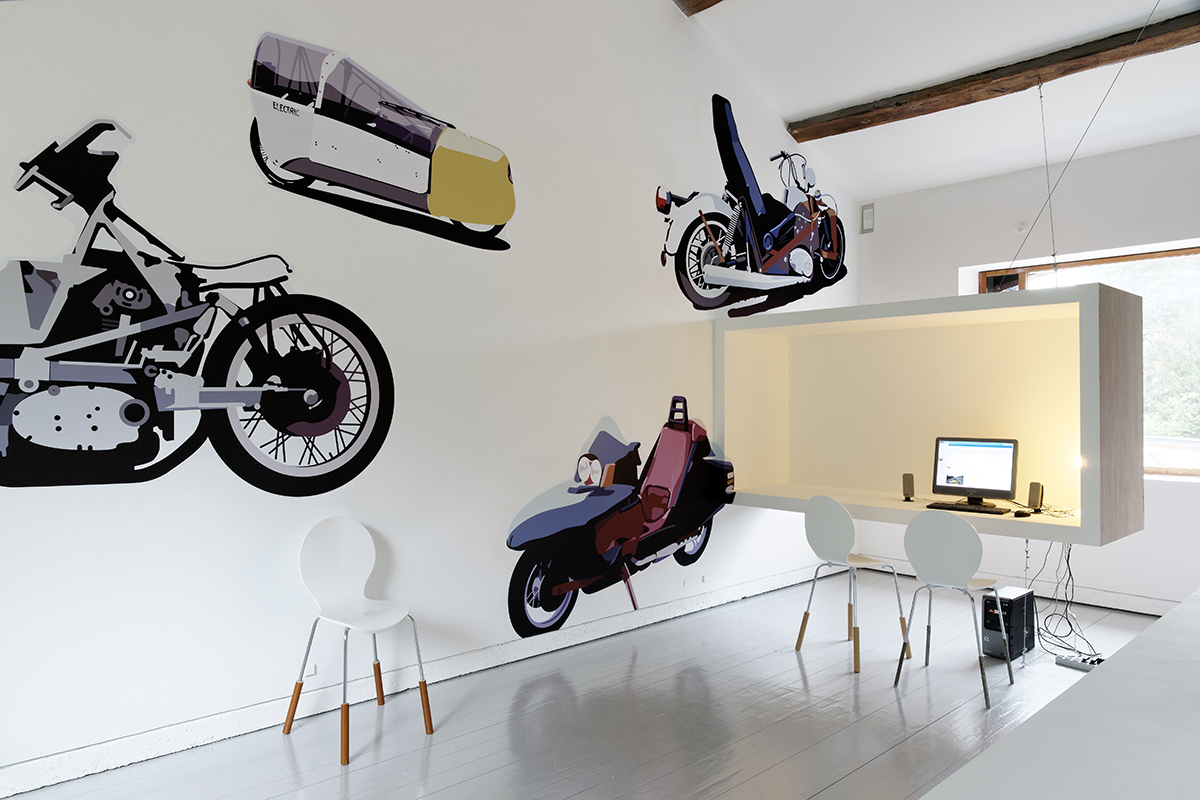 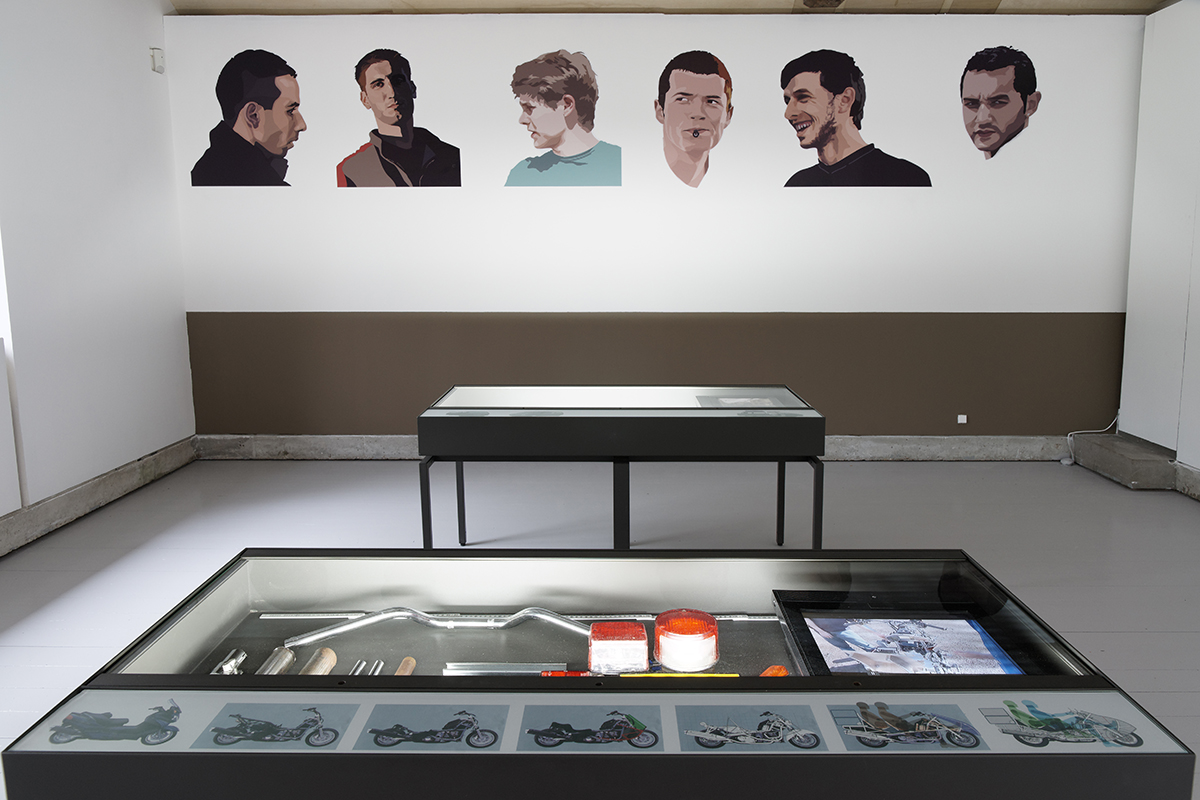 The Collins English Dictionary indicates that a prototype is “one of the first units manufactured of a product” and derives from the Latin proto-typos, meaning “first type” or primitive form. The prototype is therefore an object that carries the seed of the concrete realisation of a new idea to be introduced into reality, yet it is an idea that remains precarious and succinct, one that may be redefined at each step and that is subject to errors and modifications. Whereas the prototype in industrial terms results from a series of technical-economic agreements designed for commercial mass production, Bublex sees the prototype from the point of view of its potential to establish a new situation. In other words, what interests the artist resides in the idea of the prototype as an object of study in its own right, far more than the finished product and its supposed technical and aesthetic qualities. What interests Bublex is that the prototype crystallises both its inventor’s expectations and various forms of resistance to reality so that this object can be transferred from the status of benign ravings to that of a model.

This idea whereby the prototype attests to the inventor’s position as both solitary and heroic finds its echo in the project Feet First. Alain Bublex based the work on an enthusiastic group of mechanics who support the claim that the optimal position for riding a motorcycle is not with the chest leading, but instead, with the feet. The many followers of this current have developed zany, DIY prototypes, and are persuaded of the accuracy of their belief, which contradicts the entire motorcycling industry. Fans, engineers, weekend tinkerers or professional inventors, their inspiration stems from personalities such as Craig Vetter, pioneer of motorcycle aerodynamics in the United States, Malcolm Newell, who commercialised the Quasar in England in the 1970s, or Royce Creasey who developed the Voyager. Like this Anglo-Saxon group, the artist did not adopt industry methods and means in order to develop his own version of Feet First. The first version was put together with the most economical of means (almost a domestic economy) and was characterised by its ability to be tested by the public, who had to first sign a consent form.

When a group of engineering students from the ISAT* (Institut Supérieur de l’Automobile et des Transports) in Nevers and a group of design students from the ESAAB (École Supérieure d’Arts Appliqués de Bourgogne) approached him with a view to collaboration, Alain Bublex decided – not without an element of perversity – to suggest the project of creating an updated version of the prototype Feet First to the very people who would one day be in charge of investigating the question of innovation within major industrial corporations. The update of the prototype was designed, modelled and manufactured throughout the 2010-2011 school year, and was then tested on the tracks of the go-cart circuit in Magny-Cours in the spring of 2011, following a protocol of tests established by the students themselves. There again, Bublex’s actions bring a highly astute (and affectionate) perspective to bear on this human adventure of almost a year, instead of focusing on the technical qualities of the machine.

With L’Expérience Wabisabi, 2011, Alain Bublex bought a vehicle at the end of its life and took it on a journey from Paris to Japan, observing the slow disintegration of the vehicle along the way. The title of the piece refers to a Japanese term that is very commonly used and that literally means “melancholic beauty of a simple and worn thing”, a value that is deemed positive in Japan. Against the grandiloquent heroism of the expeditions that have seen adventurers traverse vast expanses of the earth in order to conquer faraway, exotic lands, the artist thus opposes the absurd heroism of an inadequate and incongruous object, constantly patched up throughout the journey, just to make it go. While driving his machine through Germany, Poland and Russia, he was forced to make do with some less-than-fabulous arrangements, with some external parts of the vehicle requiring duct tape, the roof having to be repainted white in order to stave off the heat, and with all the mod cons slowly breaking down (heating, radio, electric windows). Upon reaching his destination, everything besides the pure motor functions of the vehicle no longer worked, with only the most archaic part of the vehicle subsisting. By pushing it to its limits, the vehicle thus returned to the state of a prototype; although this was a prototype that had been developed through wear and tear, and not by design, unlike Feet First.

The two experiences reflect one another in the sense that they are situated at opposite extremes in the life of a technical object. The first – Feet First – is not yet an object, whereas the second – L’Expérience Wabisabi – already no longer is one. The former is prospective and projected towards the future, wishing to affect it; the latter relates to usage, as though suspended within its archaic component. But in both cases, these two objects-under-transformation escape from the circuit they were derived from, in order to form a new circuit that is unpredictable and rudimentary, but exciting.

Fittingly, the exhibition Le Vrai Sportif est Modeste does not produce artefacts but attests to this new situation. Also produced with an economy of means akin to DIY, it literally places the car and the motorcycle in a face-off arrangement in the space, with the two prototype-works, indicating in passing a transfer from the technical field to that of art. But beyond the display of these two objects, what the exhibition stresses are the human experiences that underpin them. Using photographs redrawn on the computer – a common practice for the artist – Alain Bublex presents us with the experience and its heroes, their attempts to create a form within the register of reality. But the equivocal element distilled by these computer-aided drawings draws this reality towards speculation, like a copy of itself, which establishes – within a spectrum and at a moment T – one attempt to exist among others, leaving the field of possibilities wide open and showing it to be potentially infinite.

* The production of the work Feet First was made possible thanks to the participation of the ISAT and the ESAAB.