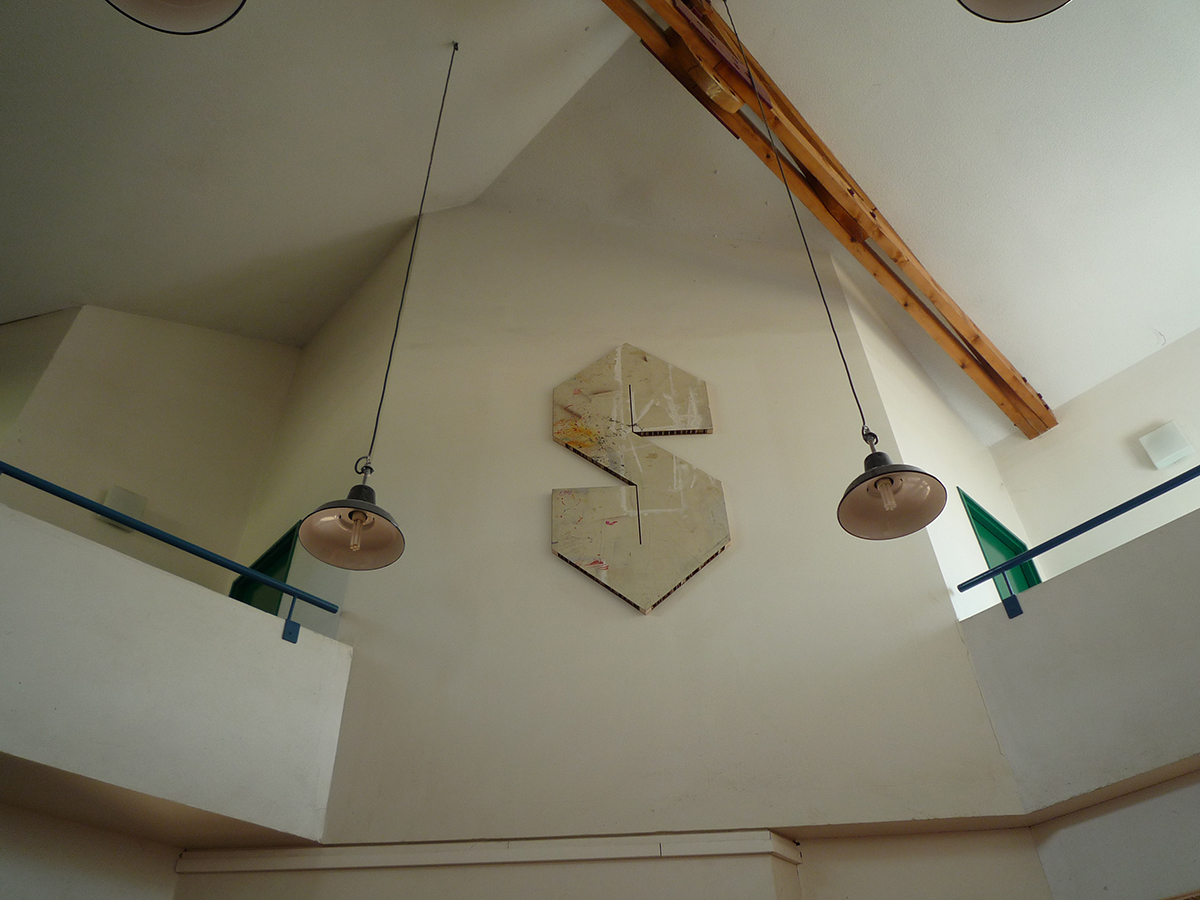 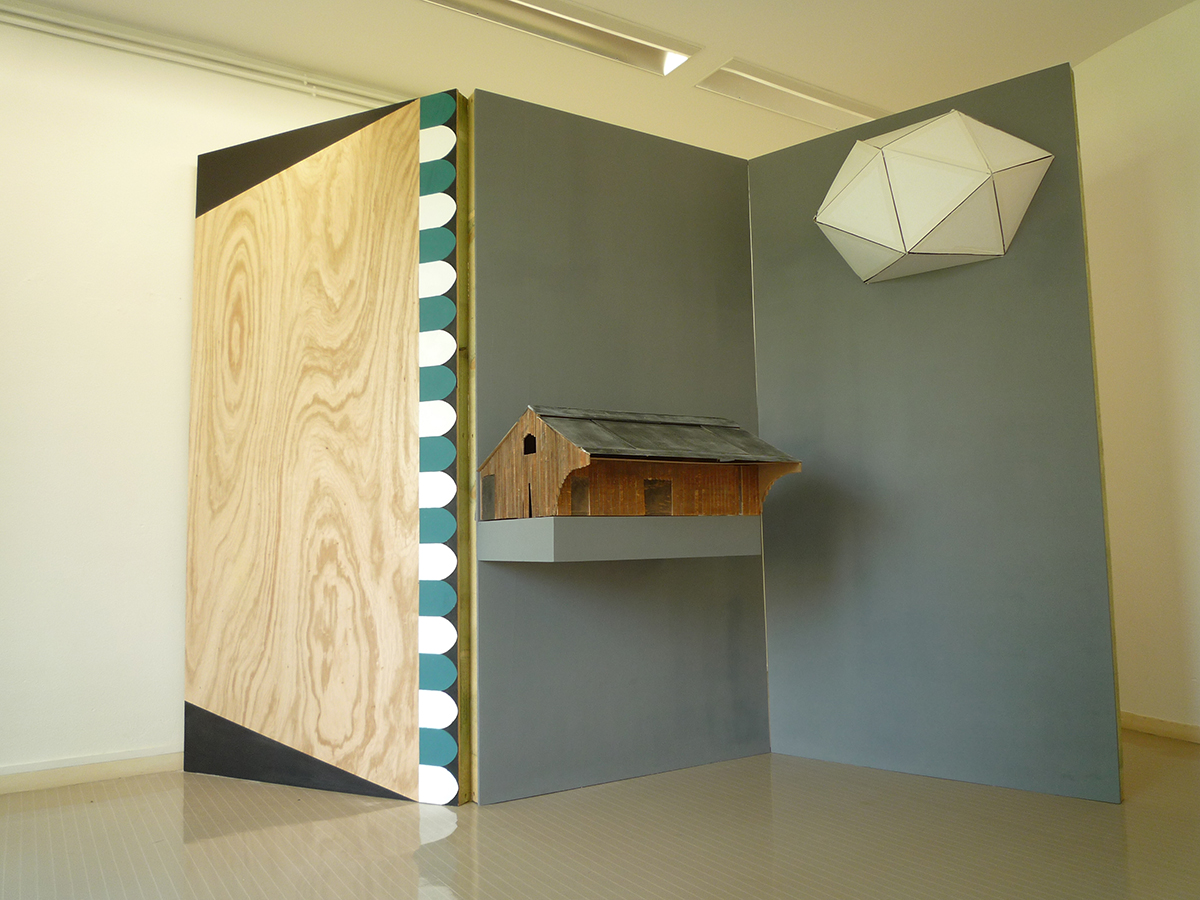 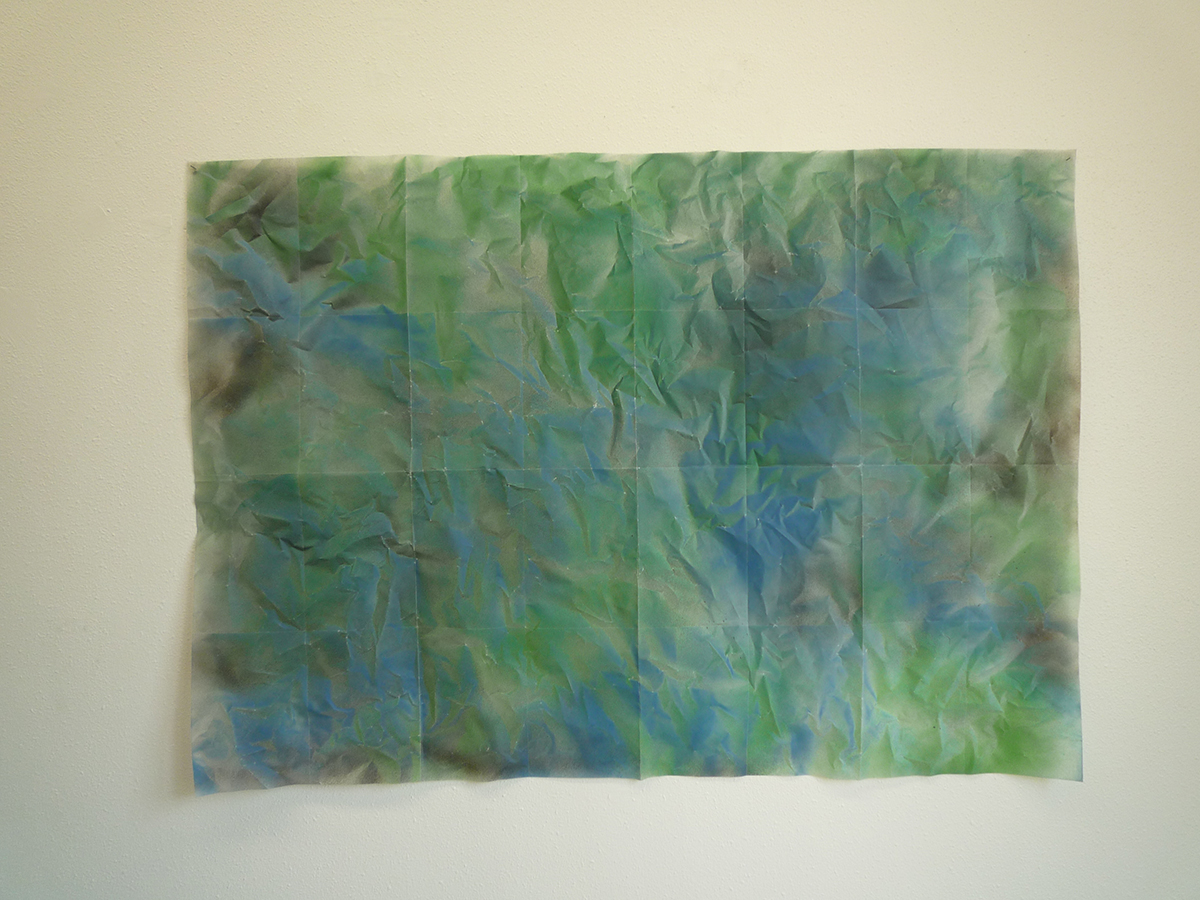 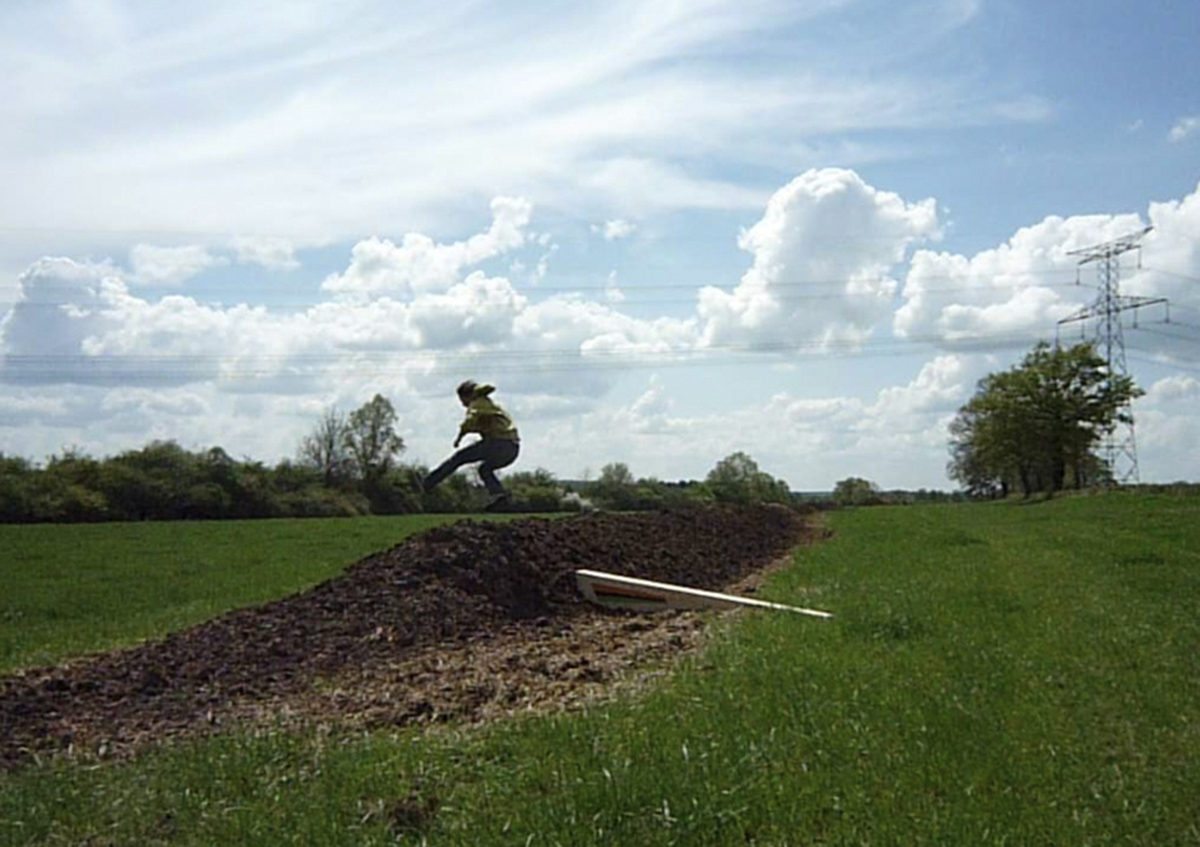 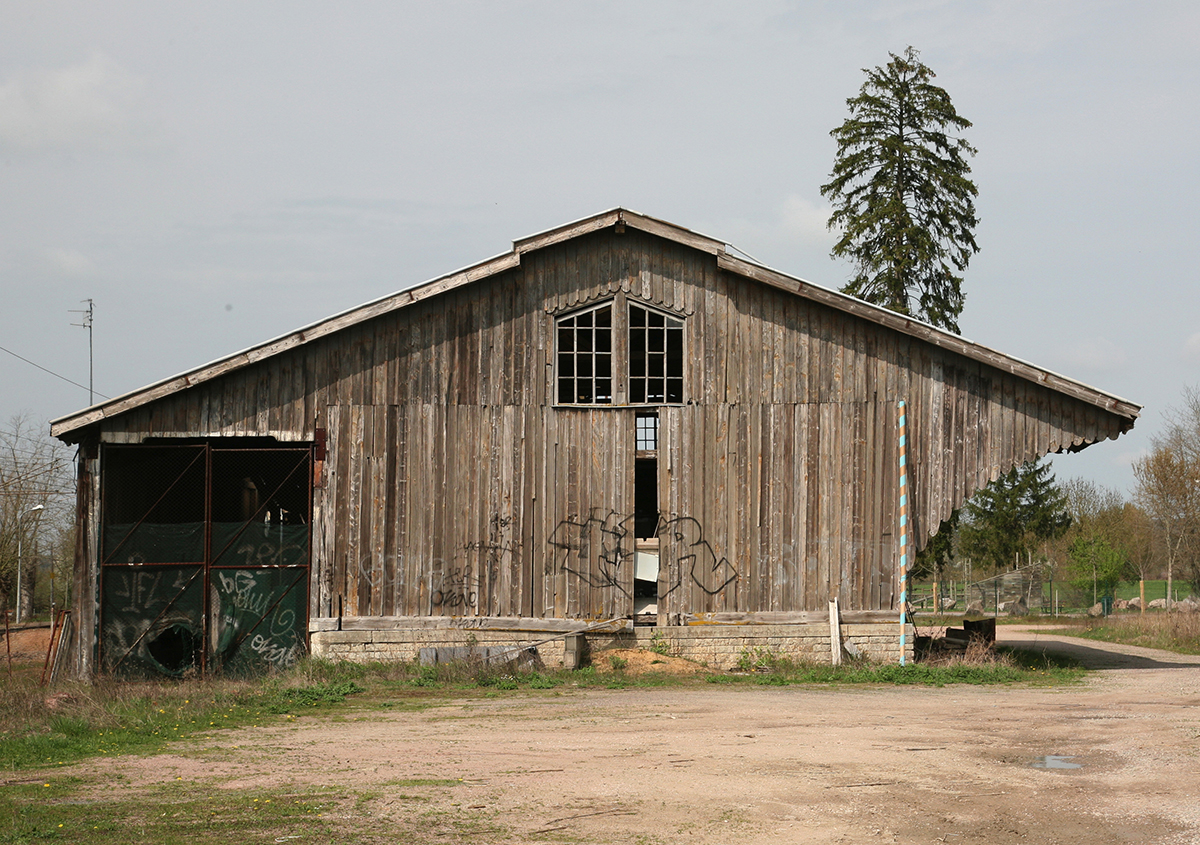 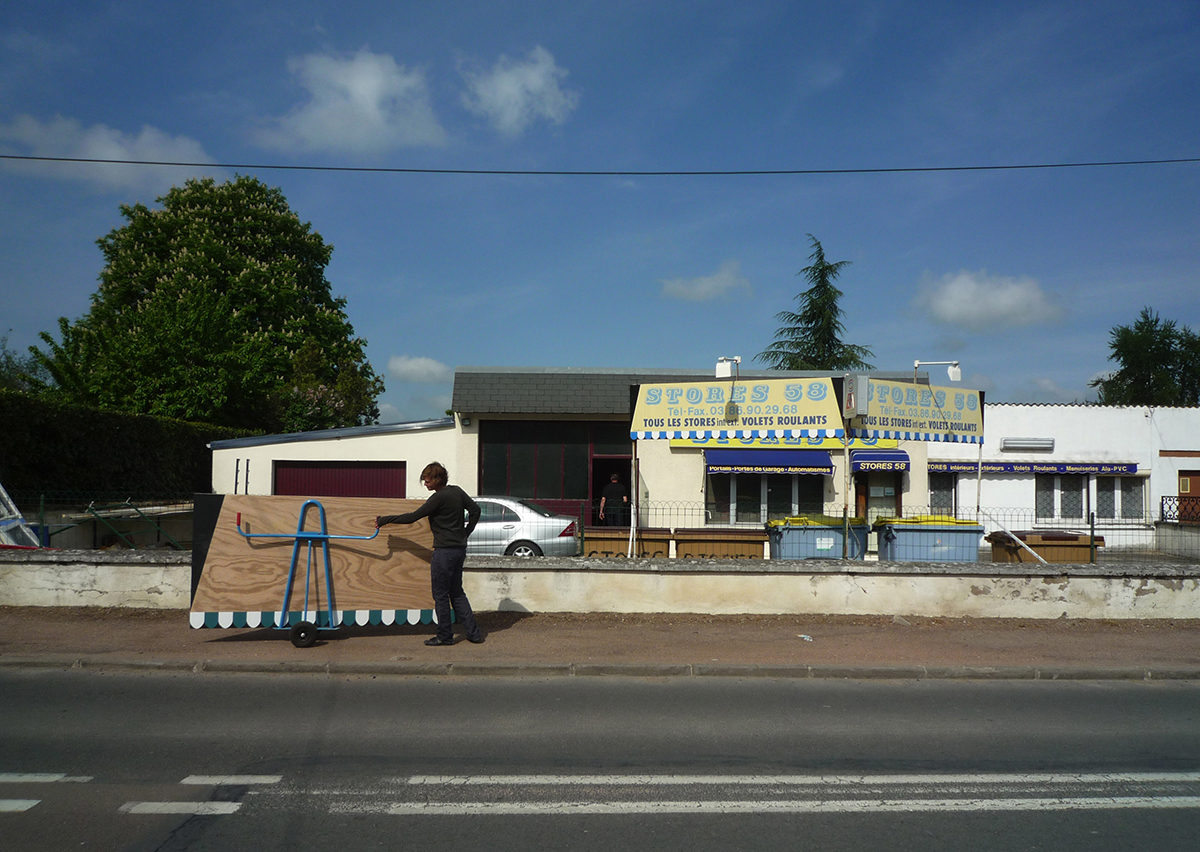 Aurelie Godard and Chloe Dugit-gros practice sculpture. When they decide to work together, the confrontation between two respective and singular universes reveal a unique real resistance sensitive in tension as the various parts of the installation evoke.
This installation, the result of a scheduled meeting, is entitled “Introduction à la nouvelle method”. As part of their residence at Parc Saint Léger, Centre for Contemporary Art, they develop a project for a new definition of their  practice that is the challenge to personal convictions and envy to test their work habits.

We can imagine that the adopted method proceeds in archeology: digging a given geographic perimeter-Pougues-les-Eaux and around-and then make statements based on various parameters: topographic, architectural, performative. Each artist has her own map of the territory. Aurelie Godard picks up stains on the ground of her workshop drawing potential geographies. Chloe Dugit-Gros, more brutally, crumples and bulges the paper to create the volume in the manner of a thermoformed IGN map. The method then operates by induction: the photographic statement of architecture changes within the facility in a reduced model that coexists with a number of patterns “on the spot” in the suburban setting. Performance as experience of the landscape, extends into the installation by the transformation of objects used in the action. So, the springboard that enables the somersault over the manure pile becomes the base of the bus shelter in a new method, logo in support. Everything is visible and contained in everything.

It must be said that offering a tautology by combining two different worlds is risky: it is rather an introduction. To be in the end and not being able to detect who did what is certainly an indicator of success on the formal and semantics plans. The two vocabularies meet at right junction.
Aurelie Godard dissects the codes of architecture and design by inventing hybrid forms: craters, excressences or sagging walls and ceilings that seem to melt and liquefy (Mille milliards de degrees, 2006). Sometimes acting as a footprint of an accidental event, created from scratch (The bright side of the moon, 2006, Archipel, 2005, Casual events, 2005), Aurelie Godard’s sculpture can also be organized in a more constructed way, like so many pieces of a puzzle in three dimensions (L’heure de l’étale, 2007). A table becomes the plate of a model residential area, all architected so utopian, in which each element reflects a built-codified language (Pavillon, Aubervilliers, 2009).
With Chloe Dugit-Gros, the articulation of language takes place rather at the image and the visual level. Often referring to the codes of urban culture, her realizations proceed by connection of formal elements to compose a sketch of narration. Inspired by some of newspaper archives, the sculptures of Chloe Dugit-Gros bear the scars of an past action (What a blast!, ENSBA Paris, 2006) or transpose a single picture of a boy playing in a disturbing draw contrasting materials and scales (Sans titter, 2008, from a photo of Jose Girao, 1980). The small sketches denote the process which must lead to the completion of parts, small alphabet book of the artist who returns regularly to complete coherency of the installation system.

Finally, like a red thread crossing the work, the american  S that accompanies almost all exhibitions of Chloe Dugit-Gros, represents a kind of gesture to mark the freedom of the artist without a workshop. In the manner of flags and targets of Jasper Jonhs, contemporary version, this symbol of hip hop teenager culture is cut in stand work, table of workshop, recycled materials …
These two universes gathered make us travel into a new method particularly happy and fruitful. Source of many new ways of work for both artists, the amalgam that this meet produces doesn’t impair the readability and quality of the proposal and provides the same irresistible desire to attend the second part of the match Godard / Dugit-Gros.