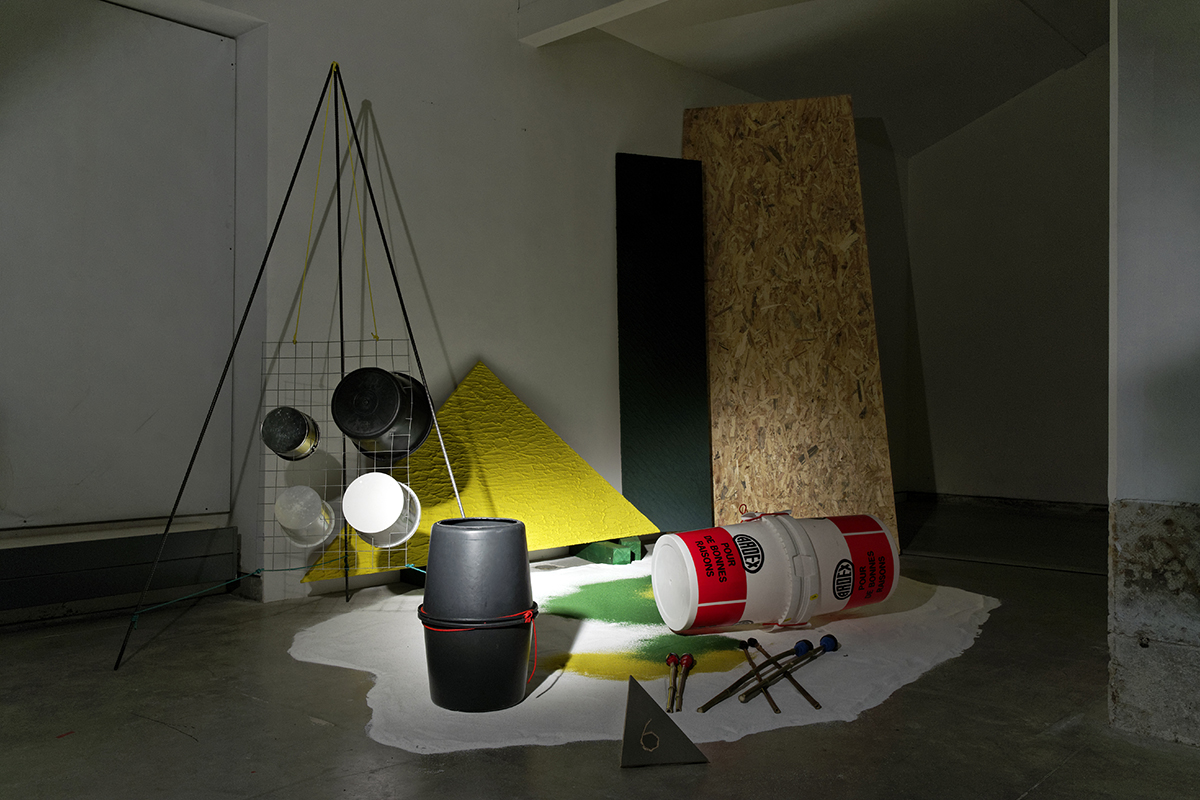 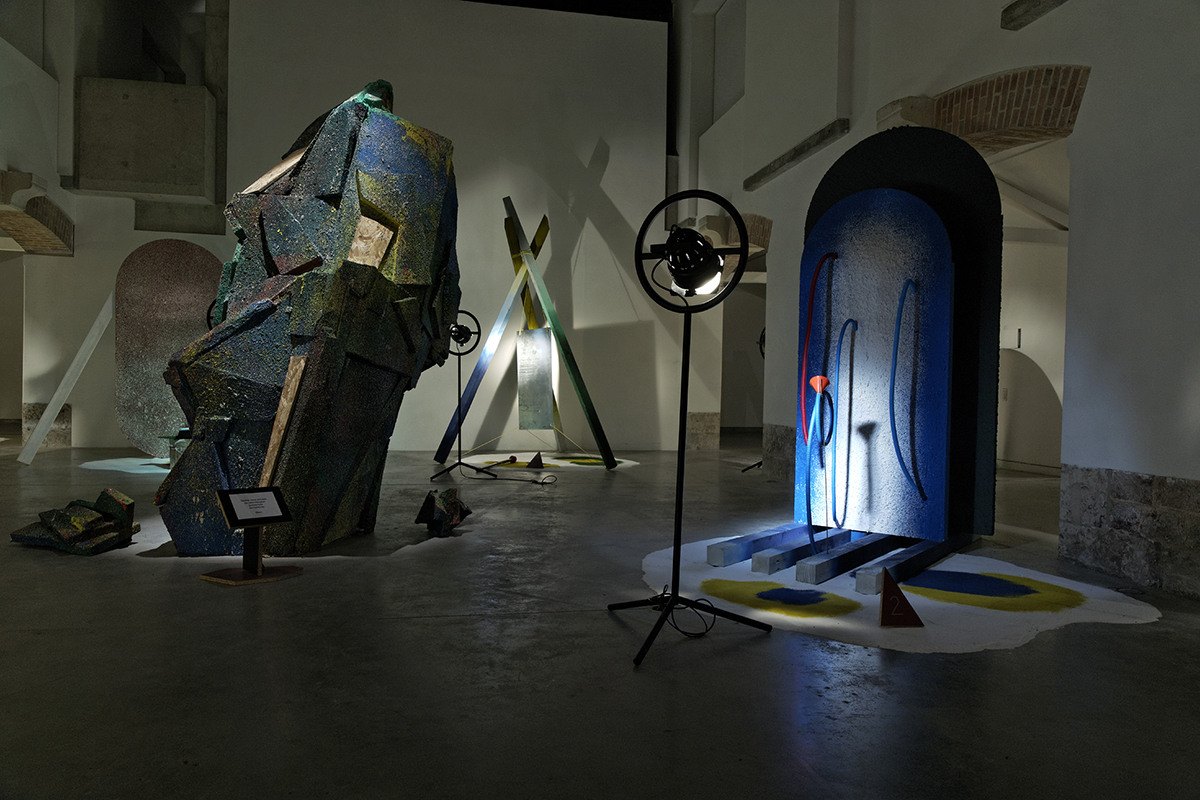 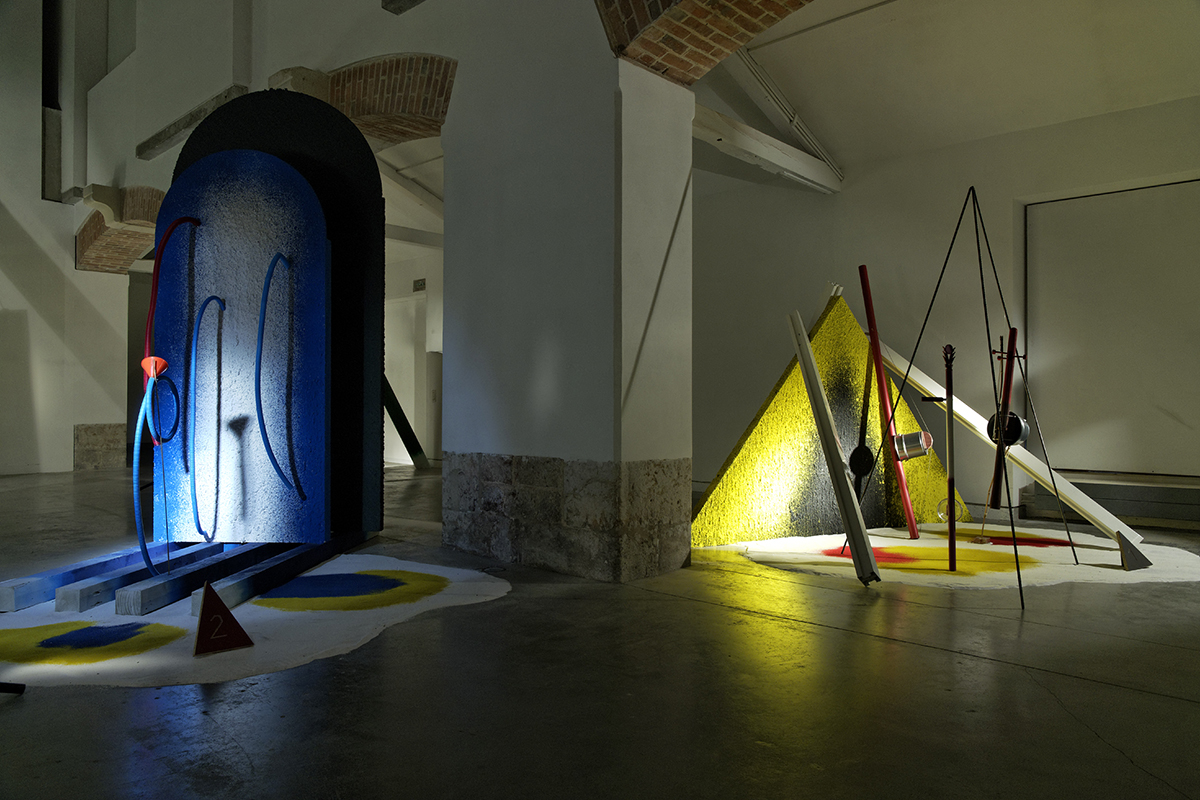 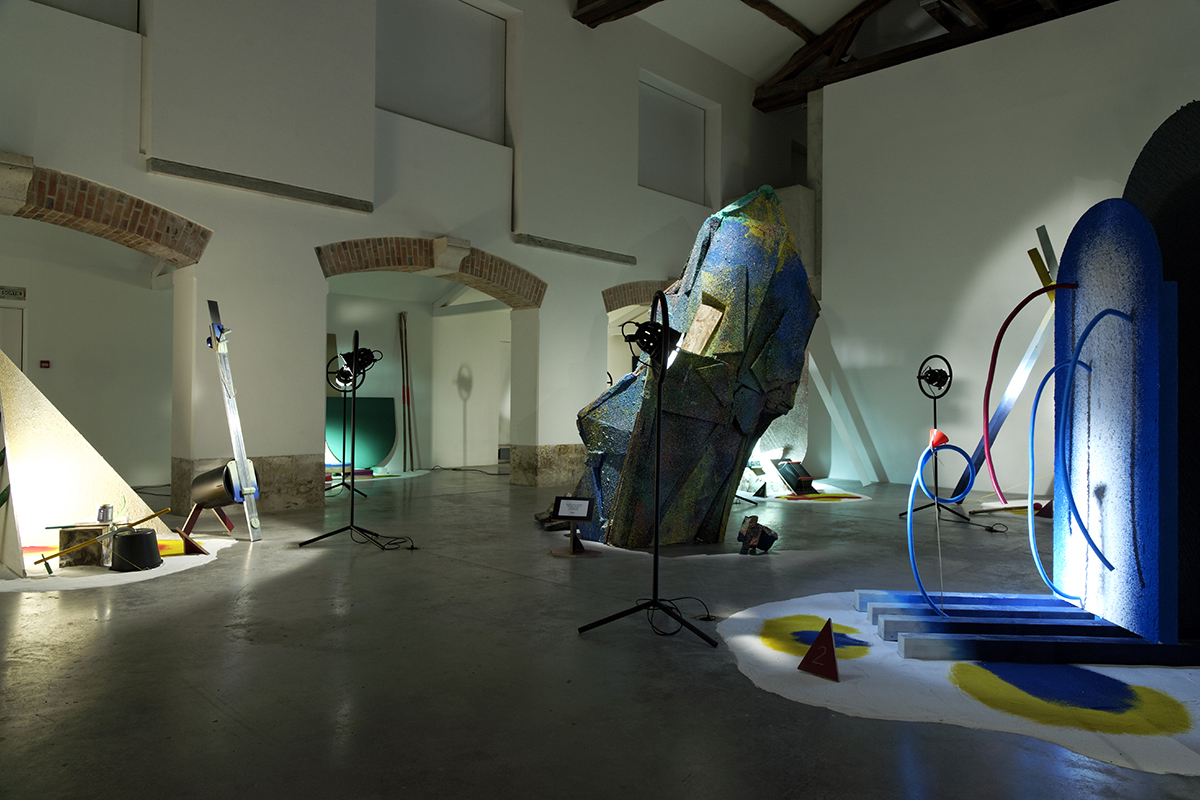 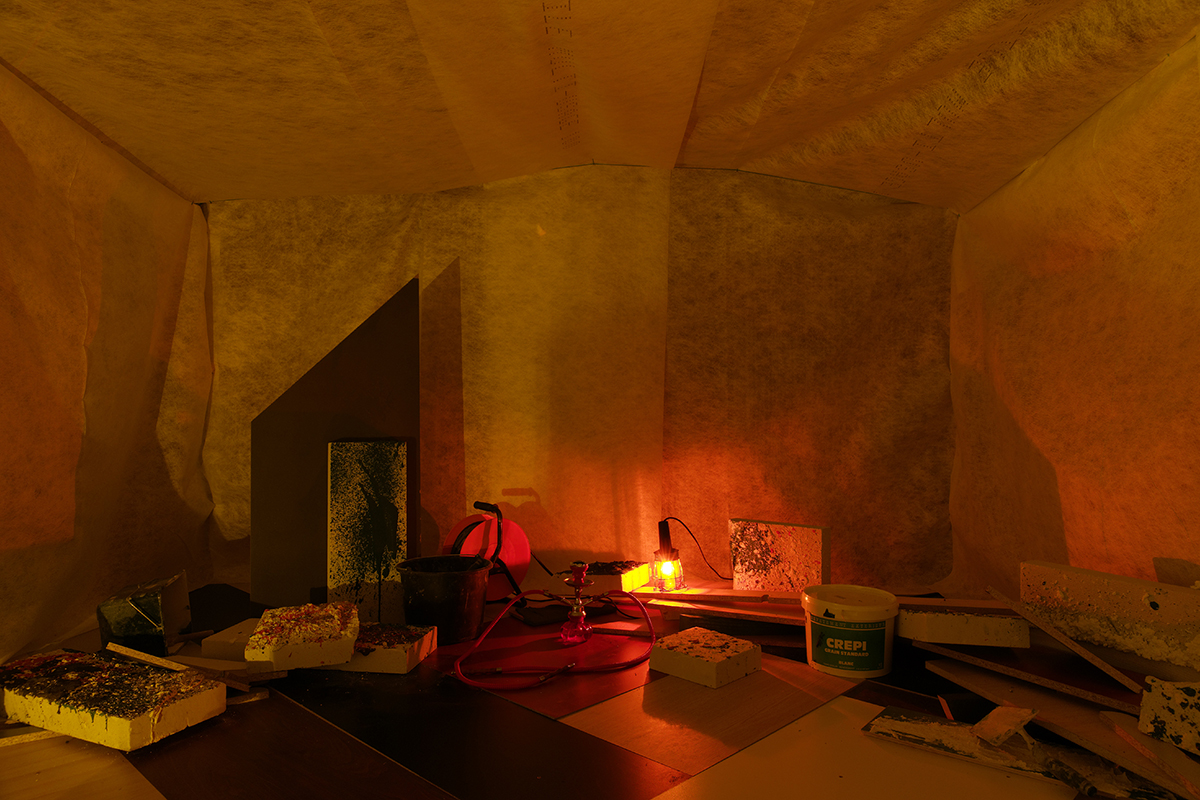 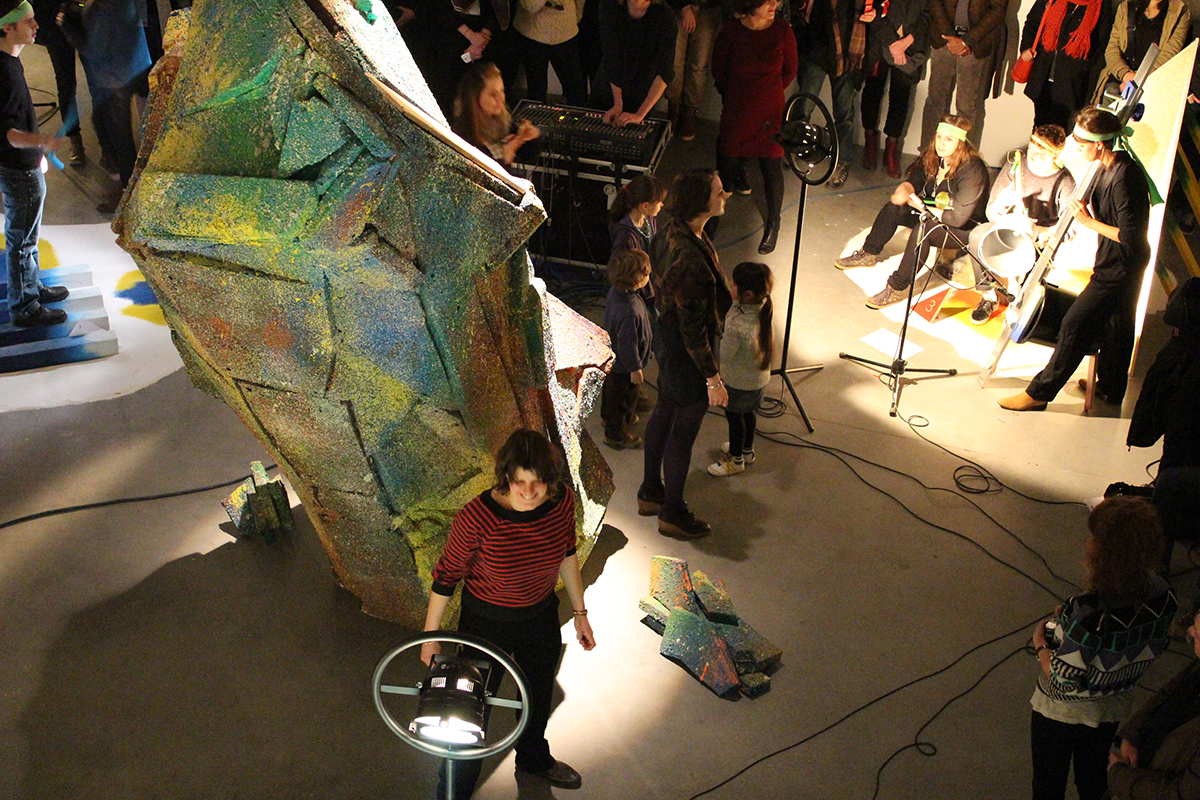 Welcome to a world in which objects overflow and proliferate, a world in which artificial and synthetic commodities parody reality or, at least, our distant memory of it. This world submerges us; it is segmented every which way, without a horizon, without a starry sky, without mountainous masses. We are drawn into a process that wears us out, after chasing the incessant movement of pseudo-novelty for so long. Type some occurrence onto your keyboard and discover the infinite spectacle of the epidemic of things. * Tired of fighting, we end up abandoning the field of thought to the experts, or becoming one of them. The reign of the commodity is here: objects are the new Golden Calf, they float in a world that has been reconverted into a museum, in which humans-turned-tourists “travel restlessly in a denatured world.” **

Welcome to the world of Clémence Seilles. Her exhibition at the Parc Saint Léger « La vie est un songe » [Life is a Dream] is a fable, a fictional space where several temporalities and stories overlap and collide. Based on a science fiction scenario made available to visitors through an audio guide, « La vie est un songe » is a dive into an absurd and chaotic time, between present, future and post-future. First of all, the visitor enters a museum exhibition of musical instruments: vestiges from another age, which is none other than our present. These instruments are devised and built by amateurs, based on materials from our post-industrial era, but their “hand-made” finish and their limited technical capacities (these instruments only produce mono- sounds) more or less consciously reproduce the formal codes of primitivism. This first part provides speculation about what the future will recognise as significant for our present but also as scenographic codes operating to stage this very present. It is as though the instruments are switched off, out of use, fetishized, but they are nonetheless reactivated at several times during the exhibition, namely during the opening, in which composer Egon Elliut breathes life back into these instruments (as the conductor of a synthetic orchestra for an amateur company formed for the occasion). This reactivation through play provides the exhibition with its first line of sight: play diverts us from the sacred, it suggests new uses that fetishisation had made impossible. Play is the child’s site of predilection: children endlessly reinvent new potential uses based on existing ones.

This first section is problematised and threatened by the invasion of a meteorite within the central space of the exhibition. This invader from a distant future introduces a dimension into the scenario that is both apocalyptic and comical: apocalyptic, as it suggests an imminent catastrophe, and comical since the meteorite more closely resembles a film set than any kind of natural element. If the earthlings of the future live on a planet in which only industry guarantees the material world, then the post-future – symbolised here by the meteorite – is a parody of the future. It is a copy of the copy, announcing a world that has become totally amnesiac concerning its natural resources. Its presence opens up the field of speculation: what kind of deep and frightening transformations has the Earth produced in order to engender this grotesque and threatening element?

All of these questions have led certain future humans to find refuge in a neutral and timeless space, the tente des réfugiés temporels [tent of temporal refugees]. This tent, which holds all the tools and materials required for the construction of the exhibition, is a refuge hidden from view, but also out of earshot, insofar as the totalising power of the audio-guide cannot reach it. It is a place for resting and gathering strength, but also a site belonging to a potential guerrilla, a place that is overflowing with ideas and built-up rage, in which the materials present are the available tools for imagining a new world. The bureau de conception fictive [office of fictive conception] opposes the tent of temporal refugees and between them, confrontation brews. This writing room is the organ of control, the site of the narrative construction of the fiction. The narrator works there in the historic archives, the past is manipulated so as to be reinjected into the present, just like in the “viscous” and non-linear sense of time defined by philosopher Elie During, for whom the future is only the present that incorporates all past events and keeps them active. Will the refugees manage to take control of the office of fictive conception?

Welcome to a world in crisis, in which everything has already been made, produced and consumed, a world that nonetheless affirms the uplifting power of amateurs, who thwart the ‘moulding-design’ of our societies, a world in which the urban, viral and artistic guerrillas position themselves as a poetic and political alternative to disillusionment and disenchantment; a world in which it is a matter of producing possibility from reality.

Welcome to our world.

** On this subject, read Profanations by Giorgio Agamben, from which this citation was taken. Agamben makes a particularly stimulating analysis of our era, basing his text on the notions of the sacred and the profane, and developing the idea that profanation – that is, the possibility of reinventing the usage of things – is the upcoming generation’s political task.