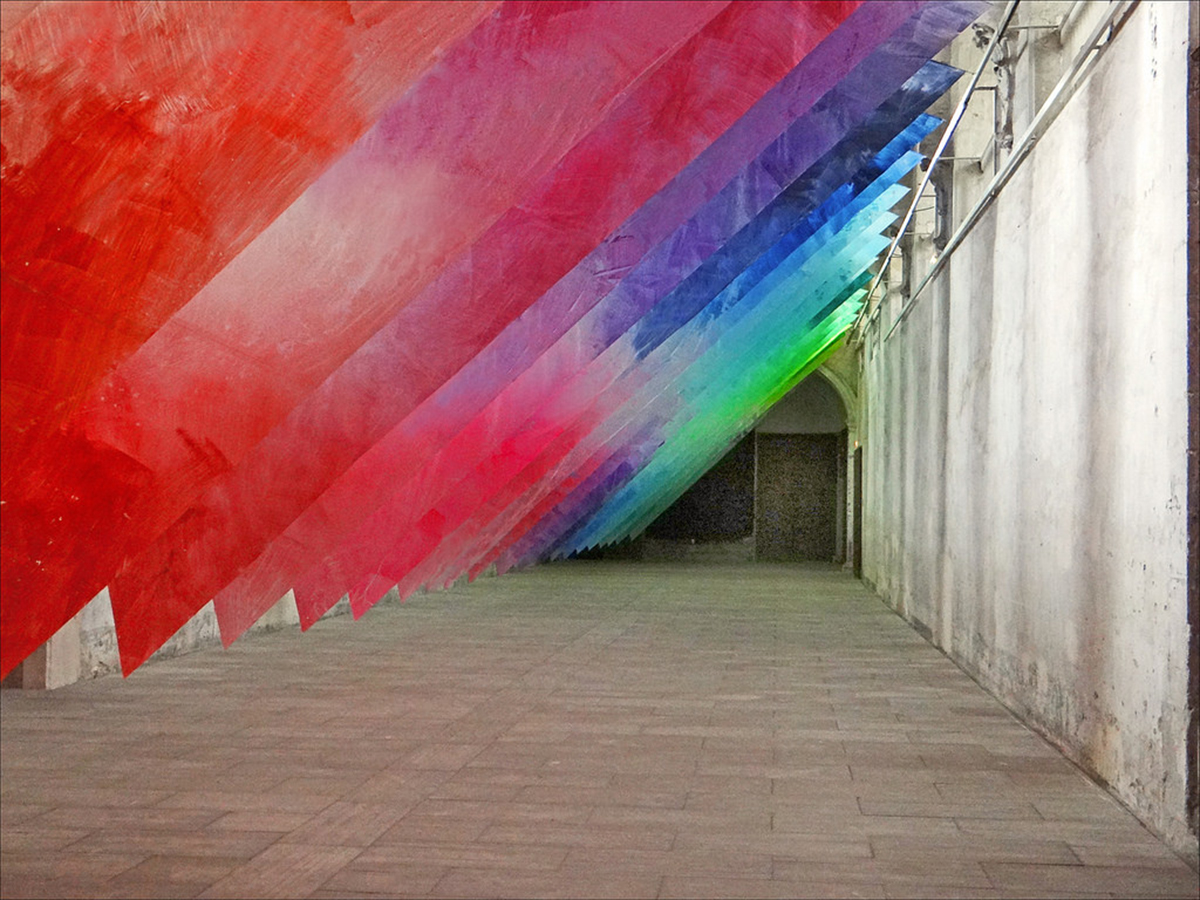 “Elsa Tomkowiak has with color a passionate relationship that involves her own body – clothes, makeup – the practice of painting and beyond, a projection into the space environment, whether natural or architectural.
It reinvents its arrangements color, in defiance of all dogmas and all treaties that we have seen fit to introduce throughout the ages. It recreates its own code to achieve the harmonies and disharmonies of its own. Its modes creation far exceed the practice of painting, painting, sculpture. All possible media are invited to restructure a space with color. But whatever the nature of the support it borrows, it is defines itself as the stratum which is primarily a means of composition.
It is through the accumulation of flat surfaces it creates its volumes. The color composite is thus achieved by a succession of flat tints. Technique that could be compared to that of the painter that coats the surface with a knife from a table by successive veneers. But precisely, Elsa Tomkowiak refuses illusionism of the painting. He must really, actually move through space.
The term stratum s apparent in the field of tectonics, with the idea that includes chaotic dynamics at a time. Stratum physically let him write in a vacuum, as successive waves of musical improvisation end up making body. volume , proliferating like the stony corals, seems to be self, materializes and becomes denser while unfolding. This mode of progression in layers and scansions impulse in the work a rhythmic quality that associates with the chromatic playing.
If the The artist is most often drawn to places in dereliction, it is because they are areas where color can expand beyond any formal constraint and merge with their disorder, in a healthy and wholesome exuberance that their réinsuffle life. But it is also to engage direct painting – understood as inextricably
mental projection and physical exertion – and the tangible and prosaic reality in which we operate. Synchronising the art and reality.
activity designer Elsa Tomkowiak is stretched by a vital impulse. In all its work can not but be impressed by the extent that it gives about him and his achievements. In spring 2004, is in the Alps on the snowy heights of Samoens she painted on the snow, hundreds of meters.
In Lyon, in 2006, it invests a brownfield site. By acting on the walls and space with large sheets of polyethylene, it creates an environment where pictorial penetrable by more than 1800 m2 where visitors can ride a bicycle. All workshops its projects, drawings and works on standalone media (the latest works on paper involving the practice of photography and mixed paint) carry this desire for expansion and outpouring of color in the environment.
We see her win the superstructures, invade the backgrounds, spread in the landscape or ruin it defines. If the artist is endowed with an uncommon energy is not a taste for the feat, but because the work must be able to
spaces and transform just for her, color is pure energy. “
Hubert Besacier