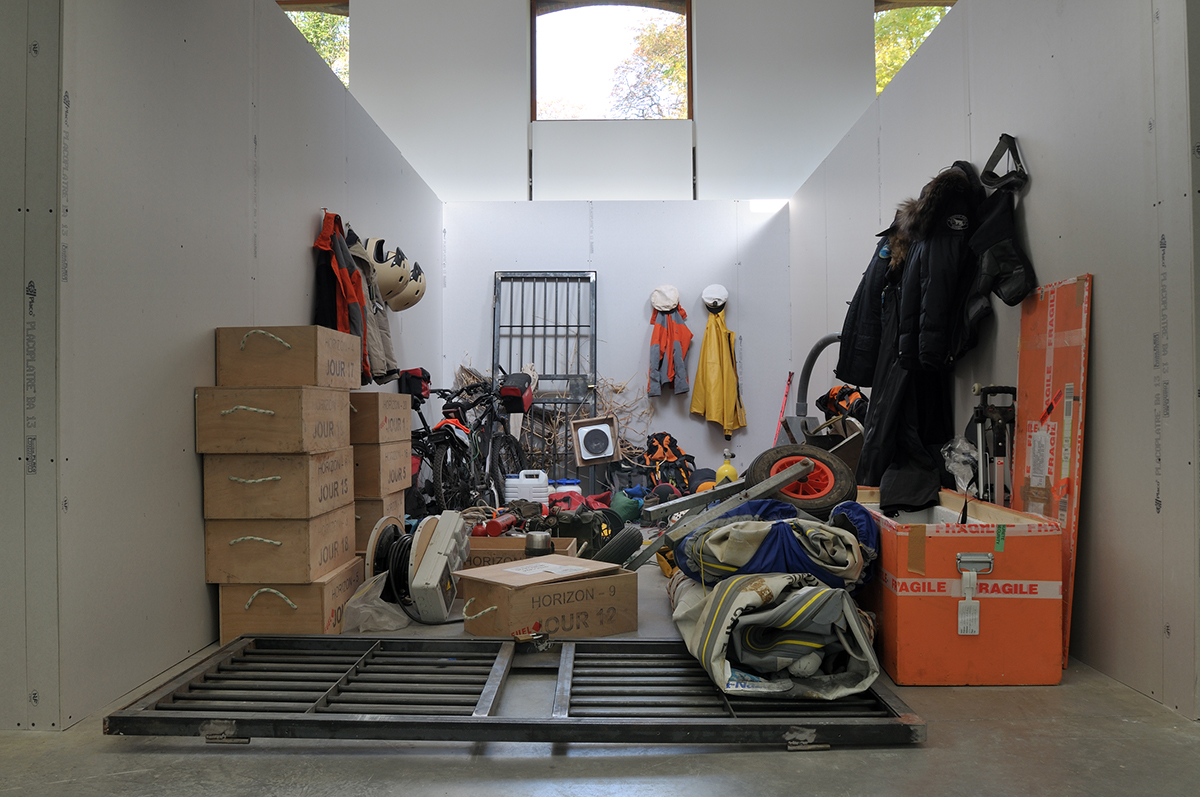 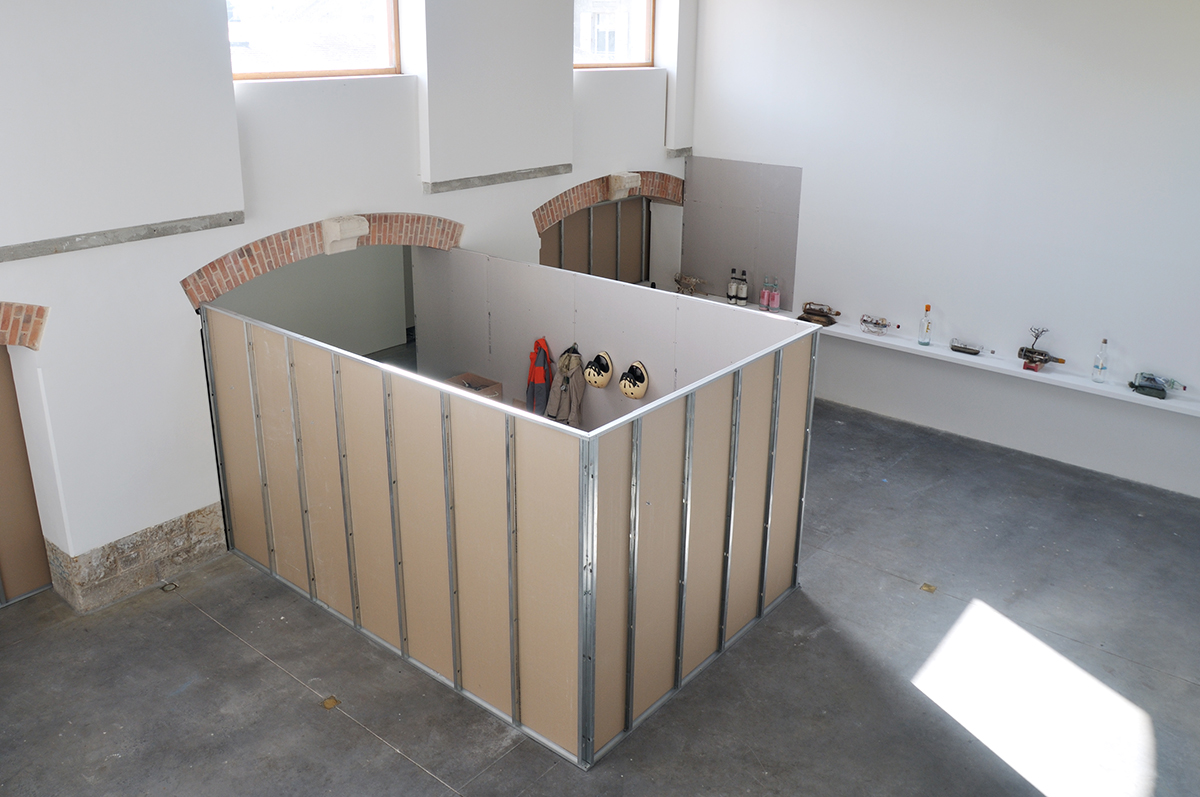 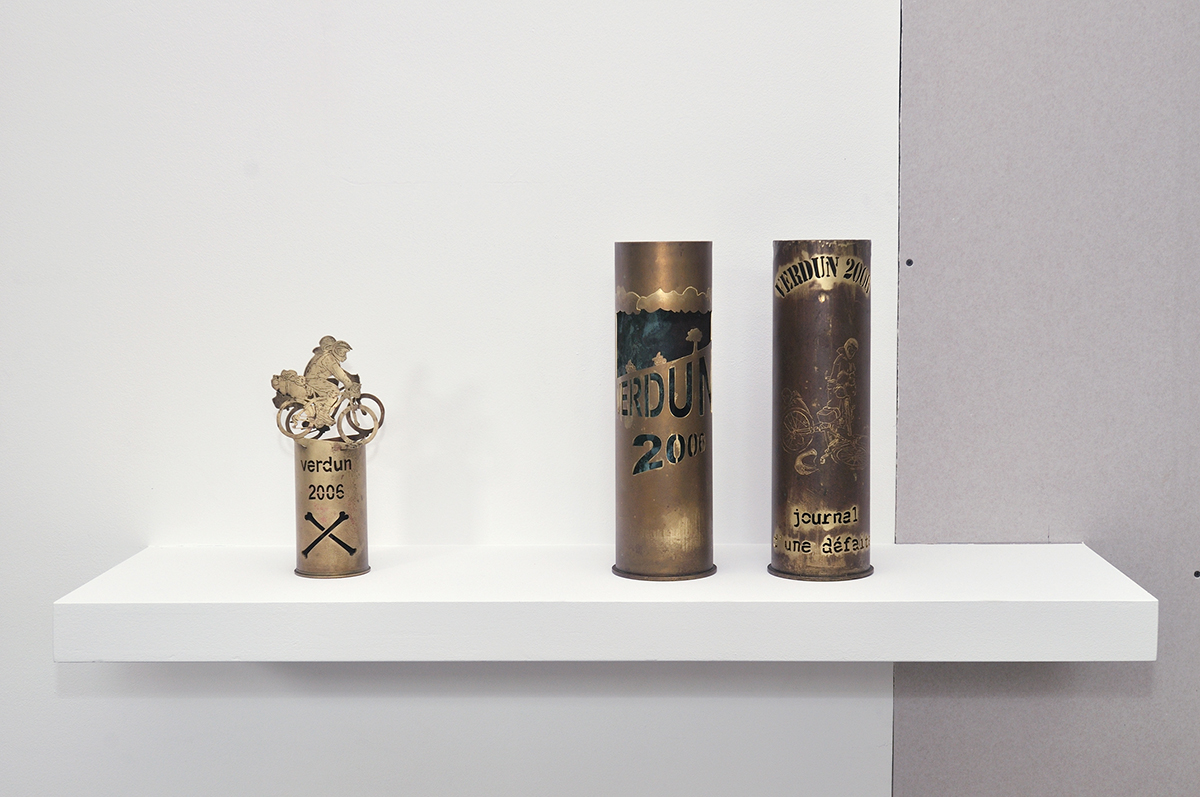 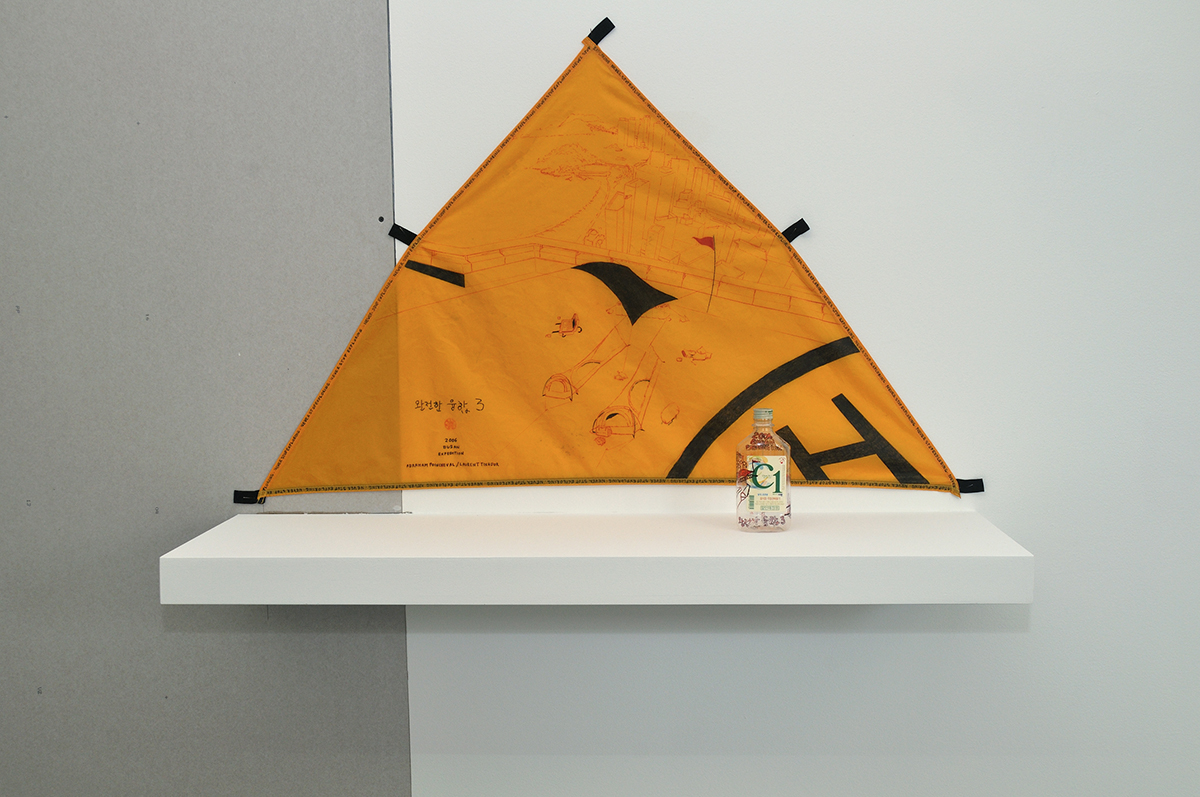 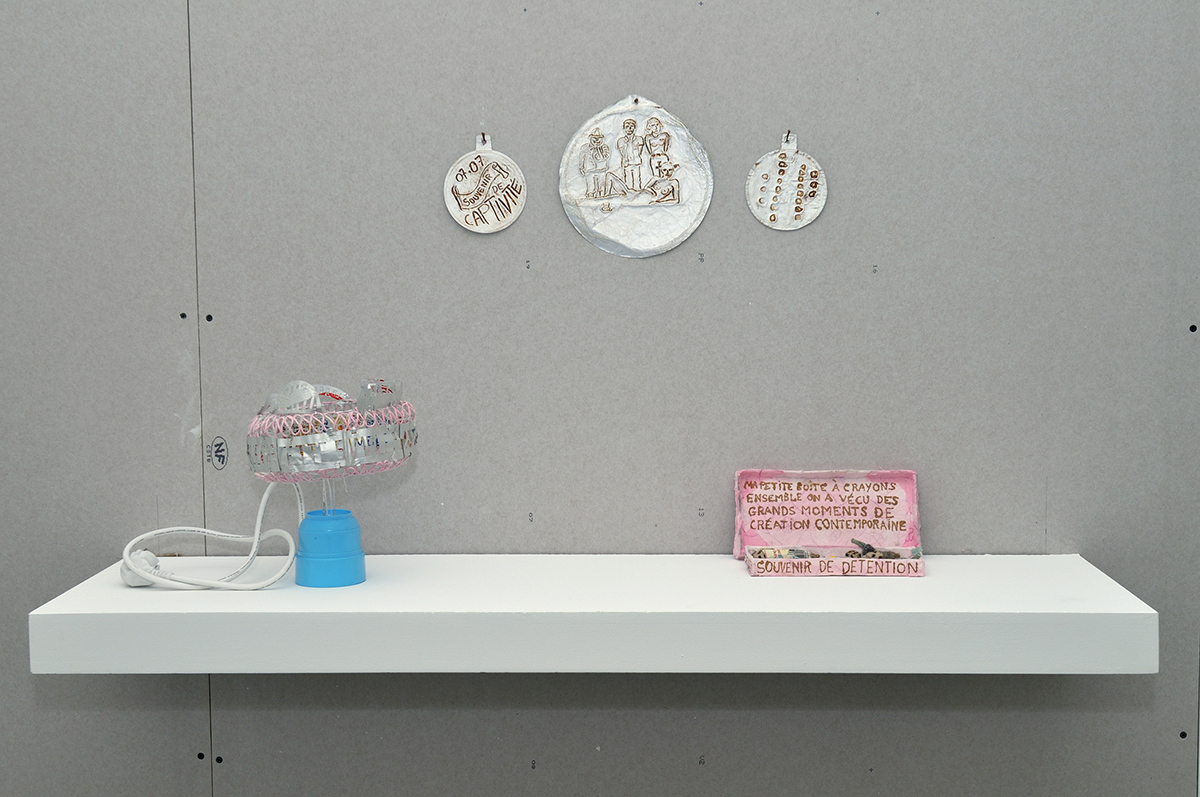 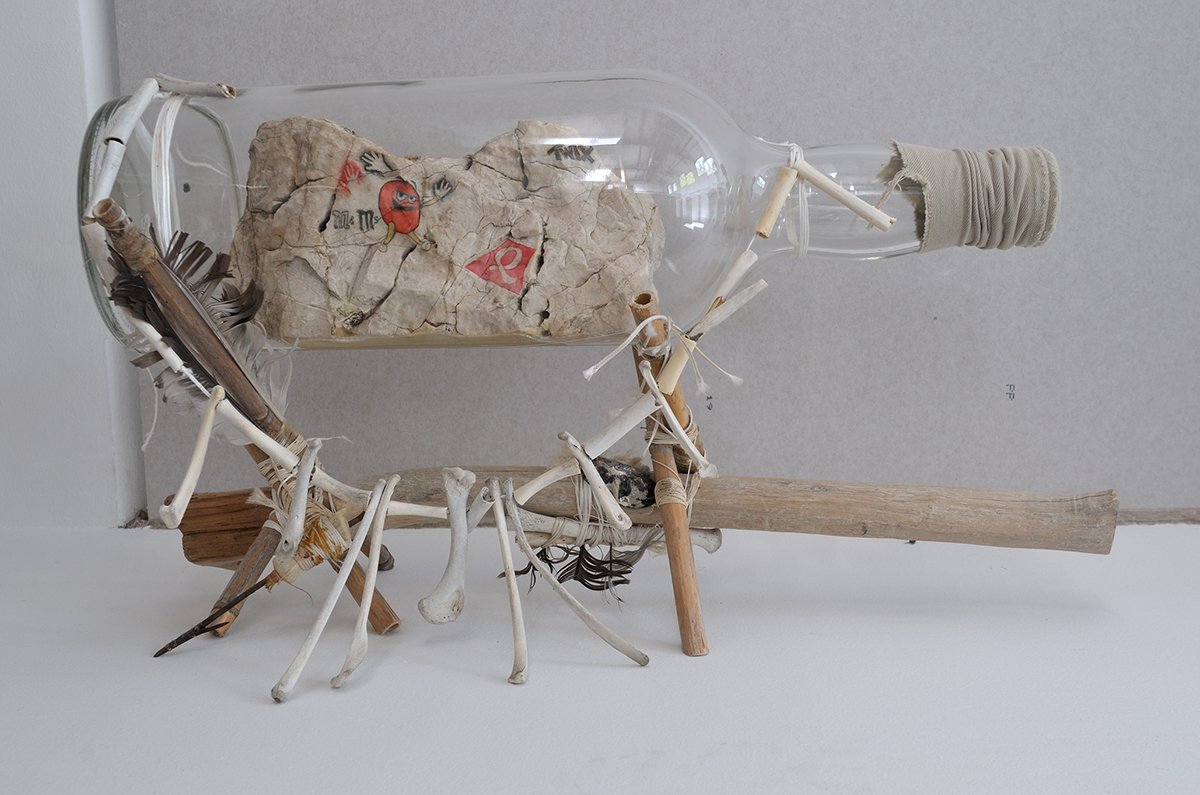 Twelve adventures, just as many videos, a dozen bottles or so, a cumbersome amount of expedition equipment, a bit of this and that brought back from Busan or the Tarn, some photos that you can take away as a souvenir… Like Hercules and his labours, it would be a safe bet to assume that Laurent Tixador and Abraham Poincheval will attack our contemporary mythology head on with this “retrospective” exhibition at the Parc Saint Léger art centre.

Except that for our two adventurers, it is not a matter of bringing back Hippolyte’s belt (although…*), nor even of killing the hydra of Lerna (that’s debatable**), let alone descending into hell (I beg to differ***). No, their ‘own private odyssey’ is cross-dressed, deviant, and their retrospective is a deconstruction of gender codes. What better proof in support of my argument than the title of the exhibition itself?

Verdun: a rather strange title for an exhibition. A word that packs a punch, that sounds harsh, that hauls in its wake a whole collection of anxiety-inducing images. Verdun: the ultimate site of conflict, the hostile zone where individuals were forced to acclimatise to the absurd military strategies of generals. Substituting the notion of a “retrospective” (surely something a curator came up with) with this portmanteau word, with all that it symbolises in the French collective subconscious, is a typical sleight of hand of the kind that the Tixador/Poincheval pair has come to master. A sleight of hand that is even more surprising for the fact that critical readings of this duo often insist more on the parodic and burlesque aspect of their adventures. The scenography devised by the duo at the Parc Saint Léger art centre provides, in this regard, a lighting design that strikes me as fascinating. The lay-out of objects whose cohesive logic and meaning in each of the adventures have since left them, like so many fields of ruins or battlefields; the accumulation of videos on a single surface, creating a visual and audio interference; the presentation of a collection of objects ‘like at home’… All of these arrangements are set out in such a way as to reach the centre of the space just as easily as the core of their practice, the heart of the mental space.

This accumulation creates a surprising temporal, mental and physical compression (Poincheval calls this a “black hole”) between entropy and absorption, which links up several mental spaces condensed into a single unit and ends up delivering an emergent final structure, a new rapport with life, a story written in tandem and in several chapters. Perhaps it is there, in the heart of this mental space, that the spinal chord of their work and the resolution of this seeming paradox are situated, between a burlesque analysis and another, more sombre and interiorised one. The work of Laurent Tixador and Abraham Poincheval seems to function like a decoy, in the military sense of the term, that is, like a countermeasure system used in self-defence. A countermeasure that is just as physical as it is psychological and social, which – sometimes by way of the absurd, or, more likely, owing to a lack of suitability for the environment – tends to place us at the heart of an incredible experience of freedom, bringing into play an active body with an alert, lively mind.

* Instead of a belt, the Tixador/Poincheval pair nonetheless return from their adventures with their arms full of trophies. With the objects and materials found on site, they construct hybrid objects, literally produced with rudimentary means and directly inspired by the ancestral technique of the scrimshaw, engravings found on widely diverse materials (bones, sperm whale’s teeth, knife handles etc.), a technique which originated in Eskimo culture and was later used by the sailors from the 19th century onwards, to stave off their boredom during long voyages.

** Naturally, our two heroes have never attacked this serpent with the head of a dog, but we should bear in mind all the same that they valiantly fought off a horde of bloodthirsty mosquitoes. Cf. Arêne, 2008, Galerie In Situ Fabienne Leclerc.

*** Horizon Moins Vingt, one of the more recent projects but also one of the more disturbing produced to date by the duo, bears a certain resemblance to this mythical episode: plunging into the most extreme unknown, surmounting obstacles, and, where Hercacles gained immortality, it is fair to say that the Tixador / Poincheval pair gained a heightened sense of freedom.