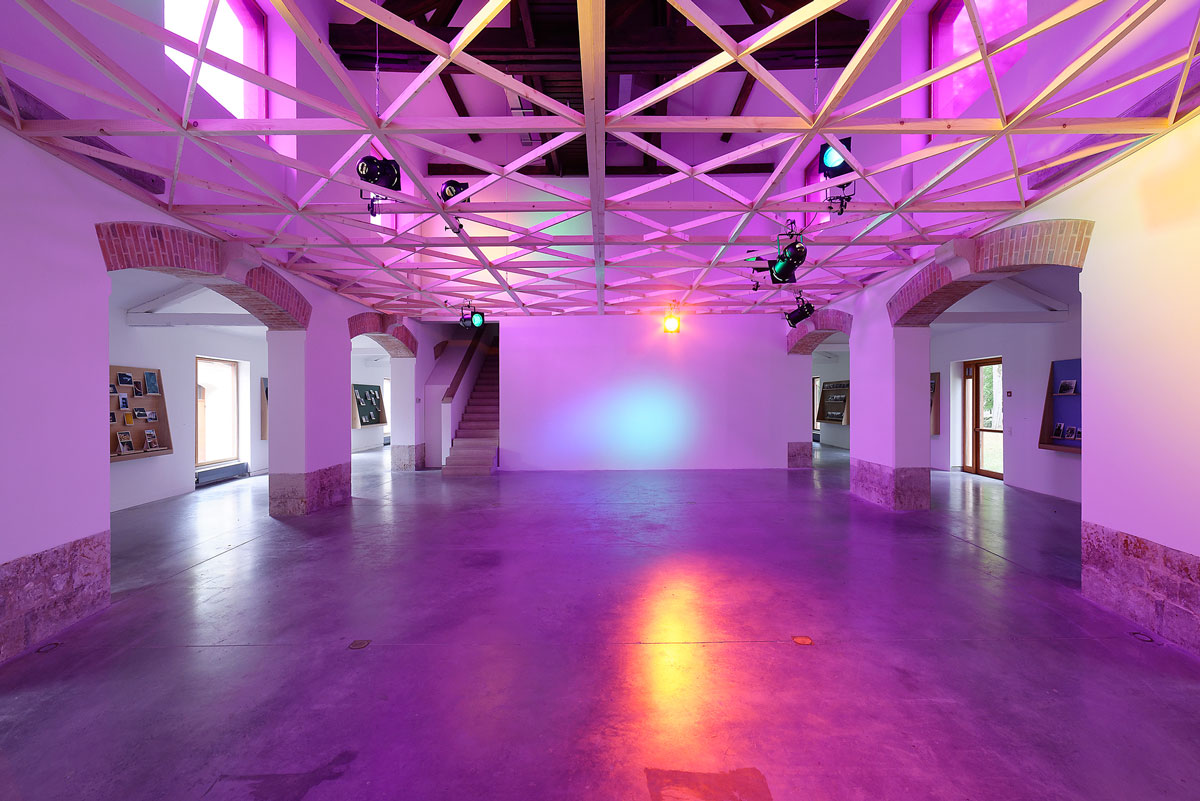 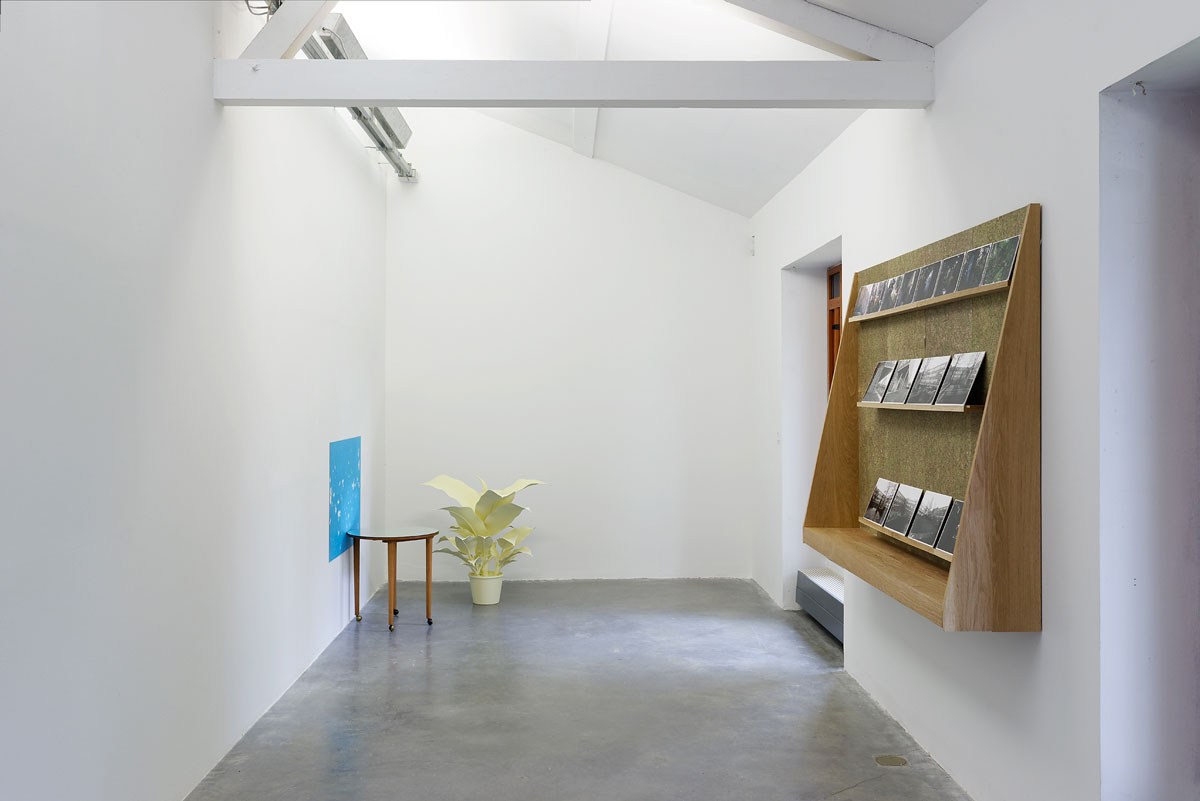 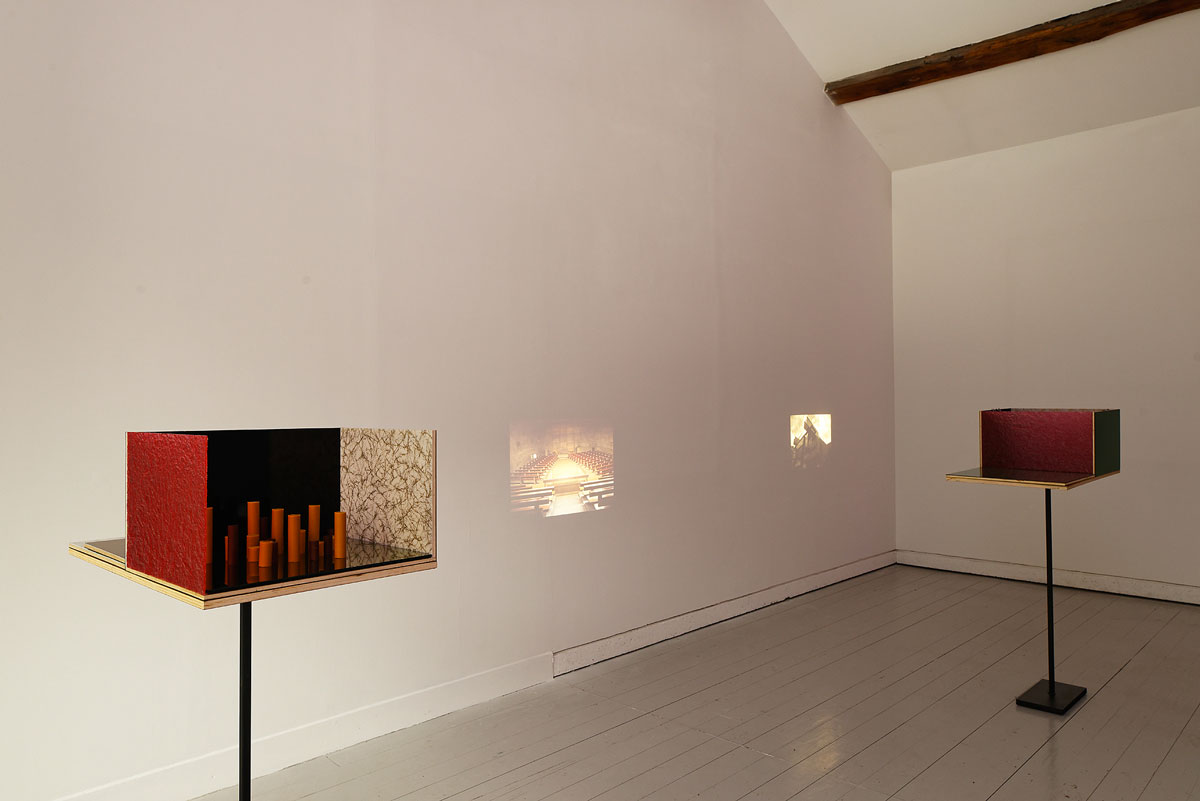 Like the kaleidoscope, Charlotte Moth’s work produces infinite combinations of multicolored images and atmospheres. Arrangement, composition and installation are some of the key concepts that make it possible to grasp her work in all its diversity and complexity. Whatever the medium employed – be it photography, film, or sculpture – the objects produced by the artist rarely insist on their independence but rather highlight the context in which they are placed. Defined in this way, the frame becomes a constituent part of both the reading and experience offered by the artist. The architecture of the venue is closely observed; her interventions modify and transform our understanding of it. Moth’s project at Parc Saint Léger focuses especially on the design of an inclusive situation, the creation of an atmosphere that calls into question the material connection of the body with objects.

The principle of composition and rearrangement that is at work in her photographs, films and sculptures extends to the exhibition in its entirety. Her whole approach underscores the importance of a constant recombination of singular elements and the connections between them. It is an approach that allows her to question and point to the ambiguities of a given medium, but helps her as well to assert her interest in impermanence and a working process that is continuously open.

The foundation of the artist’s practice is a photographic collection called Travelogue. Begun in 1999 and still in progress, it consists of a collection of analogue photographs that functions as a reservoir of ideas and images. The latter are like so many souvenirs of trips taken, remembered projects and the beginnings of future works, floating sensations that can be activated in a myriad of possibilities. The travelogue then forms a hidden part of a working process, and can be considered a conceptual tool whose elements come to light when they interfere with the development of a specific piece.

Inserts, from 2015 formed part of an overall installation titled “Choreography of the image,” a work that was originally developed for the Archive Gallery of Tate Britain. The piece consisted of a collection of ten bespoke structures for the vitrines of the archive gallery that displayed material from the archives of Tate Britain. From her discoveries, Moth proposed a constellation of archival material that examined different aspects of the life and work of Barbara Hepworth. While the archival stage of this work has since disappeared, Moth’s research for the film Filmic Sketches (2015), in which she observes and films the late artist’s studios, remains. The Palais de danse is one particular studio of Hepworth’s that happened to be a former dance school, theater and cinema used to make larger works and also to display her sculptures. Moth’s treatment of each of the so-called inserts highlights the importance of context and setting since each support is treated with different backgrounds, pointing to the display and creation of a mise en scène. Today, the archival images originally shown in the first stage of this work have been replaced by images of her own collection exploring the constant development of Travelogue and provide a completion through a form of displacement of the piece.

Moth’s interest in composition and presentation doesn’t stop at the surface of images. The importance of the structure or the display and how the featured objects are read focuses the questioning of her work on the space. The transformed architecture and the created atmosphere are constituent elements making up the work. Her way of using artificial or natural light doesn’t consist of a simple setting; rather it subtly orchestrates both the movements and the eye of the viewer. It is always the context in which an object is read that the artist highlights. In this way, she fully embraces the share of theatricality her work conveys and forges from the display and the exhibition itself. By extension the site of an exhibition becomes an immersive, creative experience of subjectivity. It is also a way of highlighting her interest in what is latent and impermanent by offering an open space of possibilities, where a constellation of objects is replayed each time in venues of shifting yet unified light.

Parc Saint Léger invites you to a series of conversations on contemporary art Sundays at 4 pm. We have scheduled two special events in this series:

Sunday 9 October
WITH CHRISTOPHE JOLY
Architect at CAUE (the Architecture, Town-planning and Environment Council) of Nevers.

FAMILY WORKSHOPS
Sunday 16 October 3 pm
GUIDED TOUR OF THE SHOW FOLLOWED BY A WORKSHOP AND A LIGHT SNACK
Five years and older, Free admission, but you must sign up.

LAUNCH OF CHARLOTTE MOTH’S MONOGRAPHE: TRAVELOGUE
Friday 28 October, 6 pm
at the Bookshop Le Cyprès, Nevers
WITH CHARLOTTE MOTH IN ATTENDANCE
Presentation of the artist’s work by the curator and art critic Caroline Hancock.

WRITING WORKSHOP
Saturday 5 November from 10 am to 5 pm
HOSTED BY PIERRE BASTIDE
OPEN DISCUSSION ON THE WORKS IN THE SHOW
Free admission, but you must sign up (subject to availability).