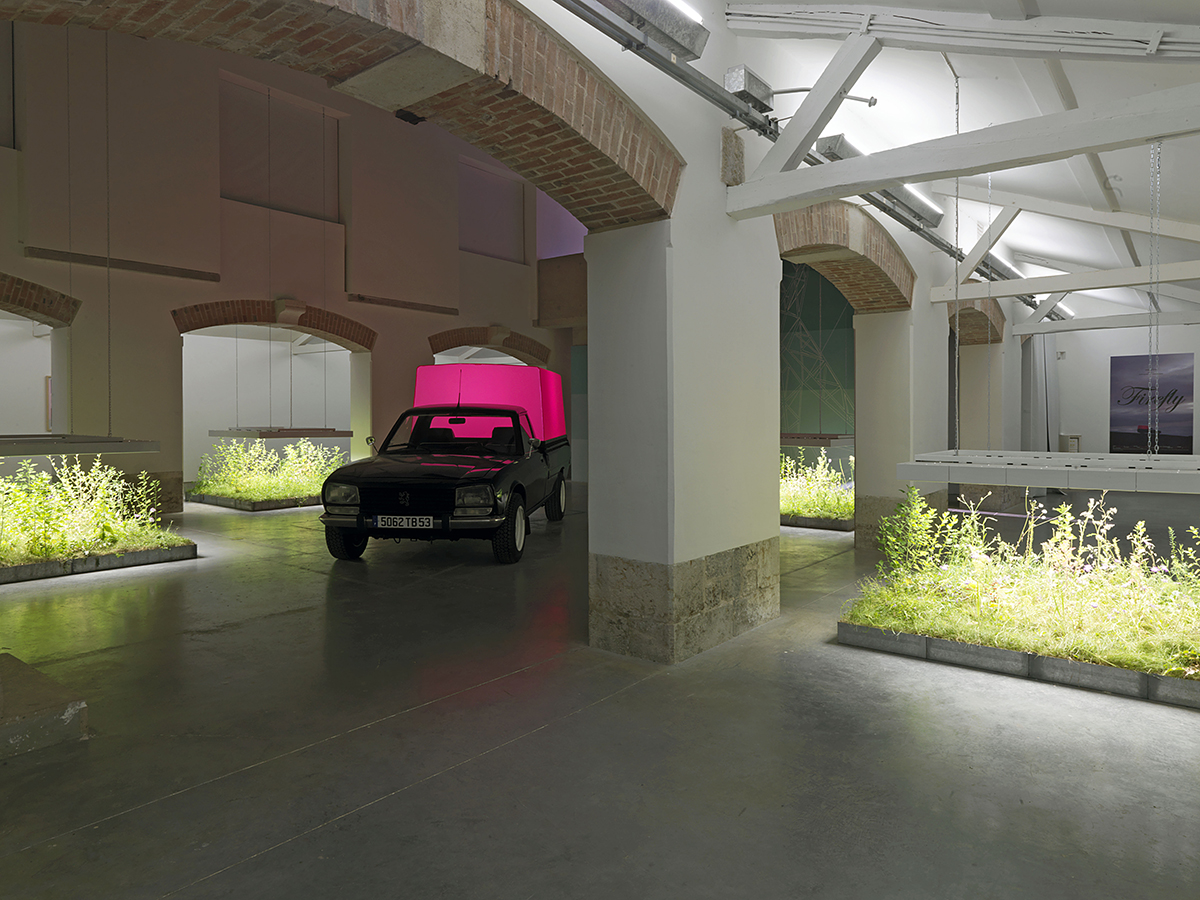 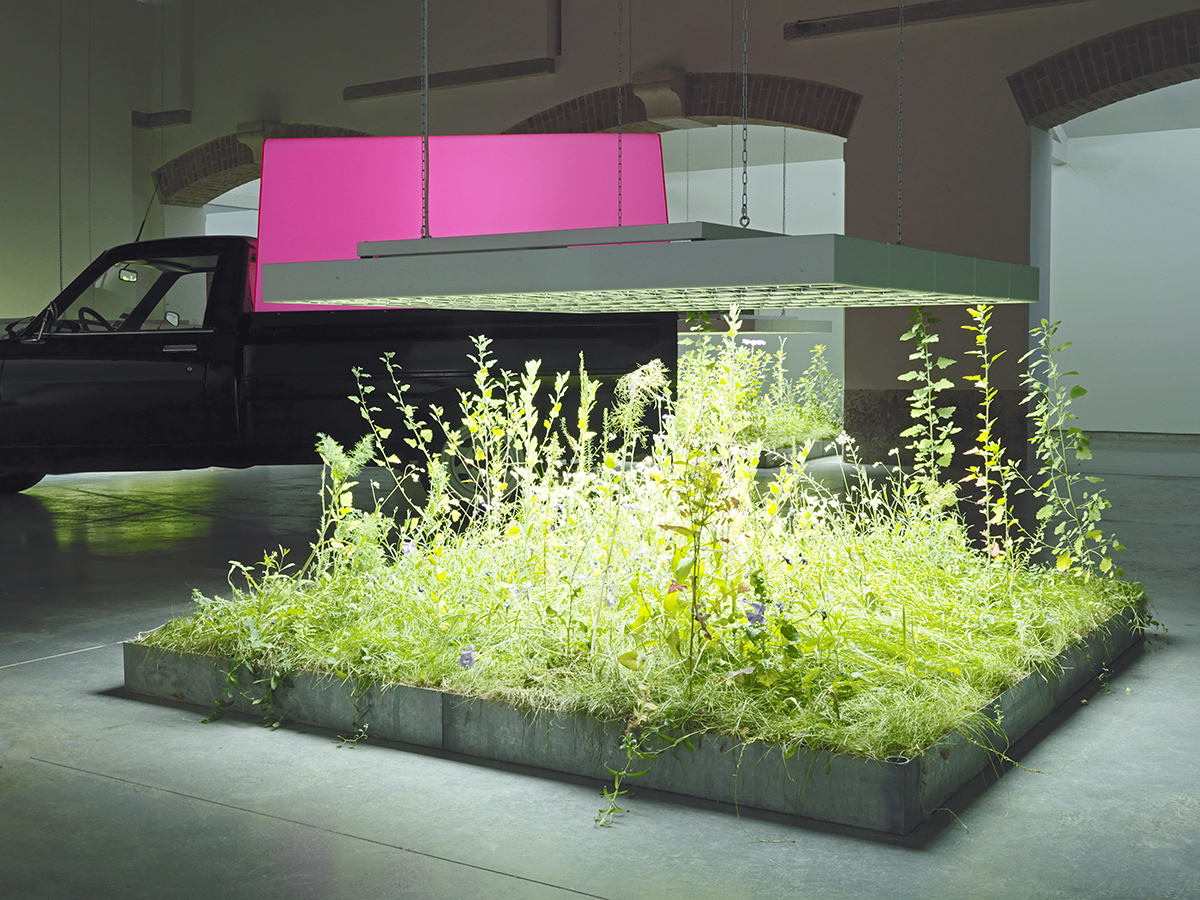 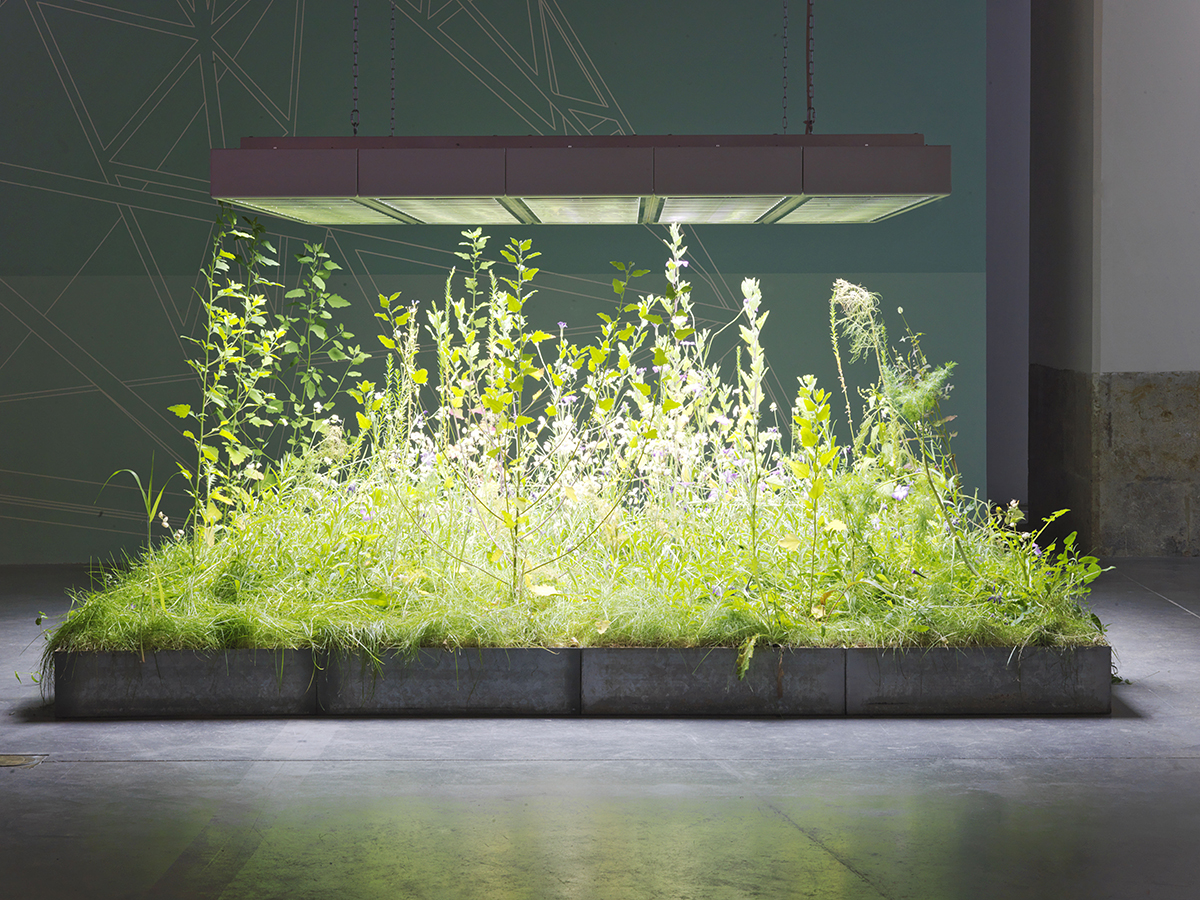 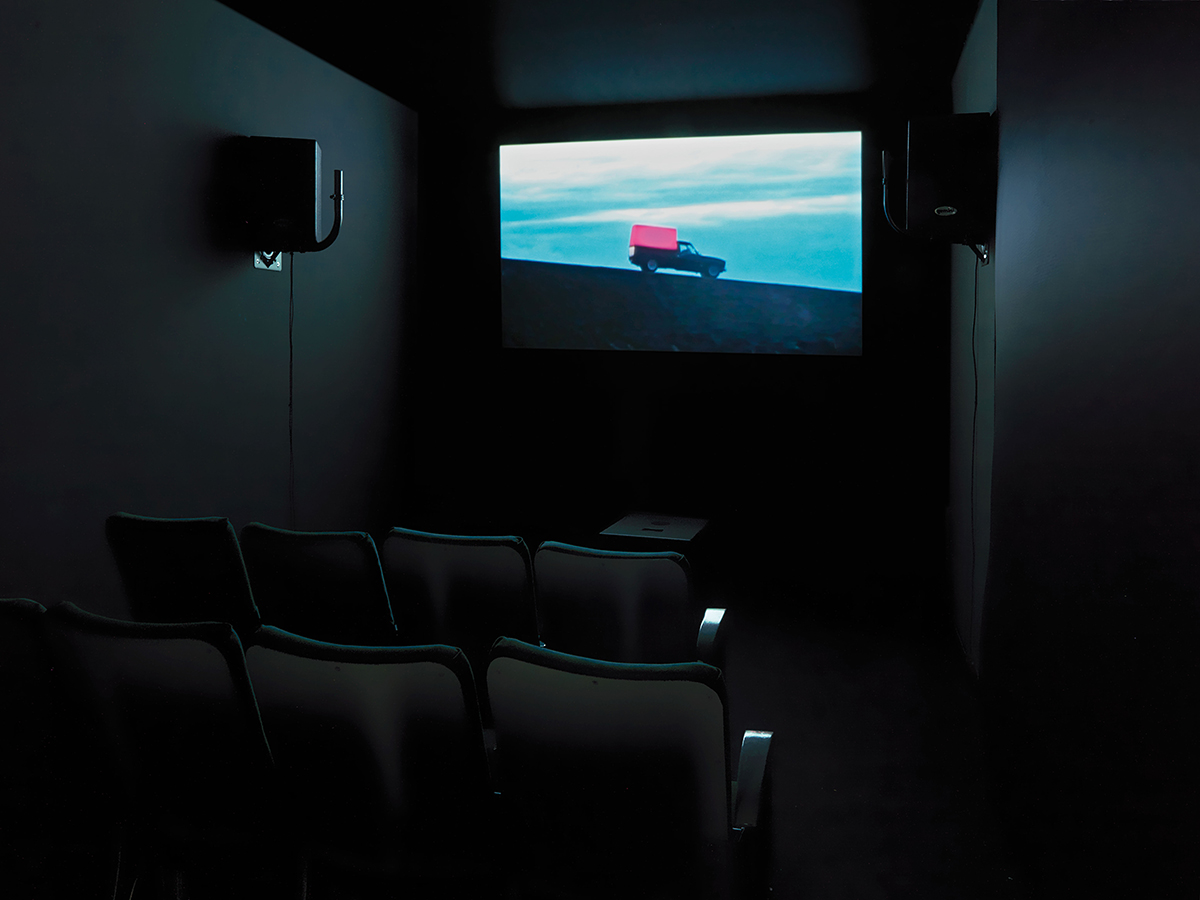 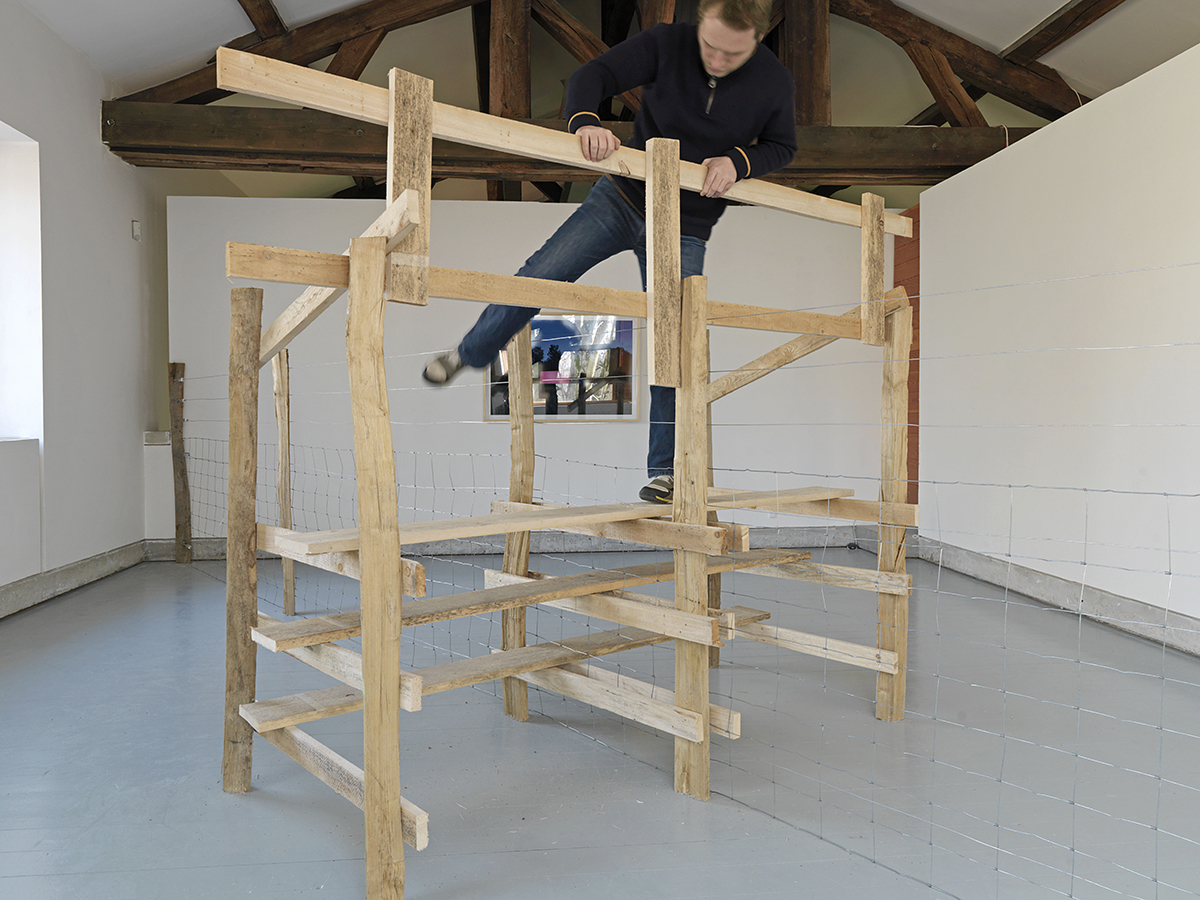 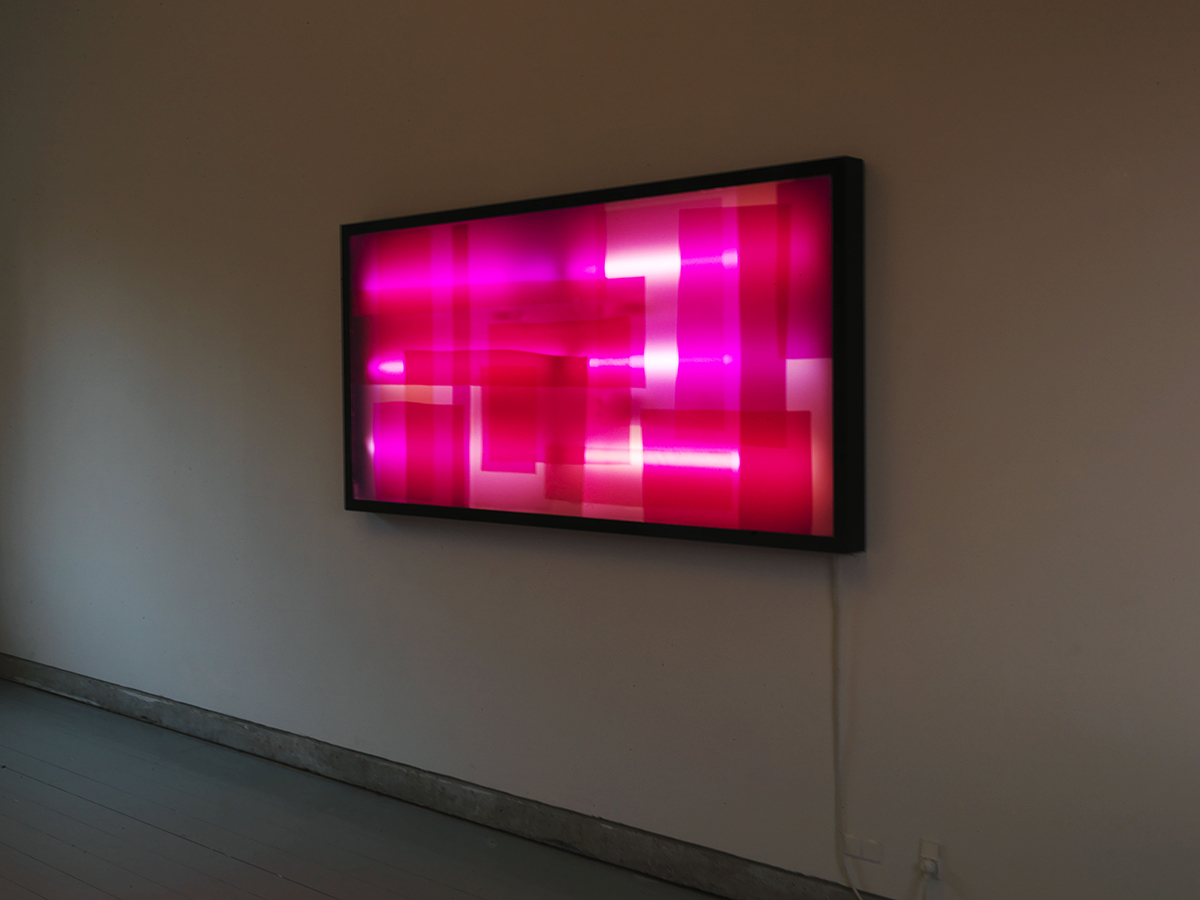 The exhibition Road Movie focuses on a single experience: a journey from Marseille to the far borders of Scotland. As both a life experience and material for an artistic project, the journey gives rise to an exhibition designed like a landscape in its own right, in which film, video, photographs, sculptures, installation and murals can easily be identified with the topography of a landscape, with its waterways, mountains and plains.
Flashback: Spring 2007, Pierre Malphettes equips the back of a Peugeot 504 pick-up with a fuchsia-pink lightbox. Accompanied by a director friend, the artist embarks on his journey to make a film with this car, which represents a vehicle, sculpture and the main character of the film, all in one. The transformed vehicle resembles a billboard that has been stripped of its advertising message, escaping the city and its commercial fate in order to liberate itself within the landscape. The itinerary, which passes from the clear luminosity of the Mediterranean to the fog and heavy skies of Scotland, allows the monochrome box to be confronted with the lights of the city and those of the countryside, gliding through the night in industrial zones to reach vast expanses of pasture by sunrise.
It goes without saying that the journey is an artistic playground that is extremely well signposted, a “genre” in its own right, with its codes, myths and heroes, which leave their mark on the cinematographic field just as much as that of art (Land Art) or literature (Kerouac’s On the Road being one of its emblems). While Pierre Malphettes’ project is distinctly different from any direct expression in the landscape beloved of Land Art artists, the question of “genre” is one that concerns him. His first video, Le Festin (2003) – a cathartic and uplifting film in which the “hero”, a dresser from our grandmothers’ generation, meets a definitive and spectacular end – adopted the tone of a catastrophe film. His second film Firefly is both a road movie and its making of, a progression within the landscape and the shoot, but it is also a quest, a quest with no aim besides that of existing within the landscape, or simply that of existing.
While the journey is the focal point around which the whole exhibition is organised, Pierre Malphettes later favoured a creative process that showcases a very wide range of collaborations – with a lighting designer, a director, an editor, a gardener, musicians, a graphic designer and a philosopher, who each intervened in turn in one of the phases of the project.
The travellers dream twice over: before and after their journey. In the exhibition, the sites visited will be literally “put (in)to (the) work”: here a pylon, there a patch of grassland or a cloister to step through. Road Movie offers to lead us across a landscape that is just as mental as it is physical, the reality of which is illuminated by the light of the fiction that it organises. It is a crossing in which “the outpouring of the dream world into real life”* is organised.

* in Aurelia by Gérard de Nerval.