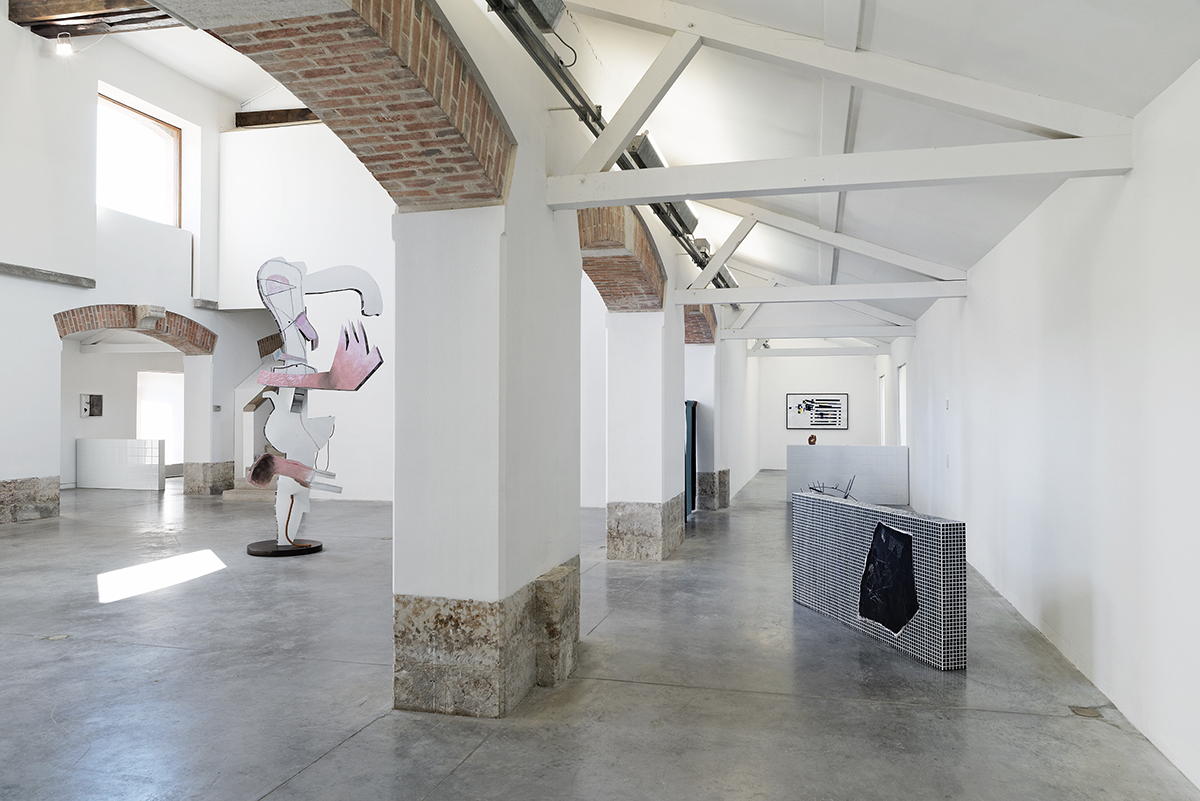 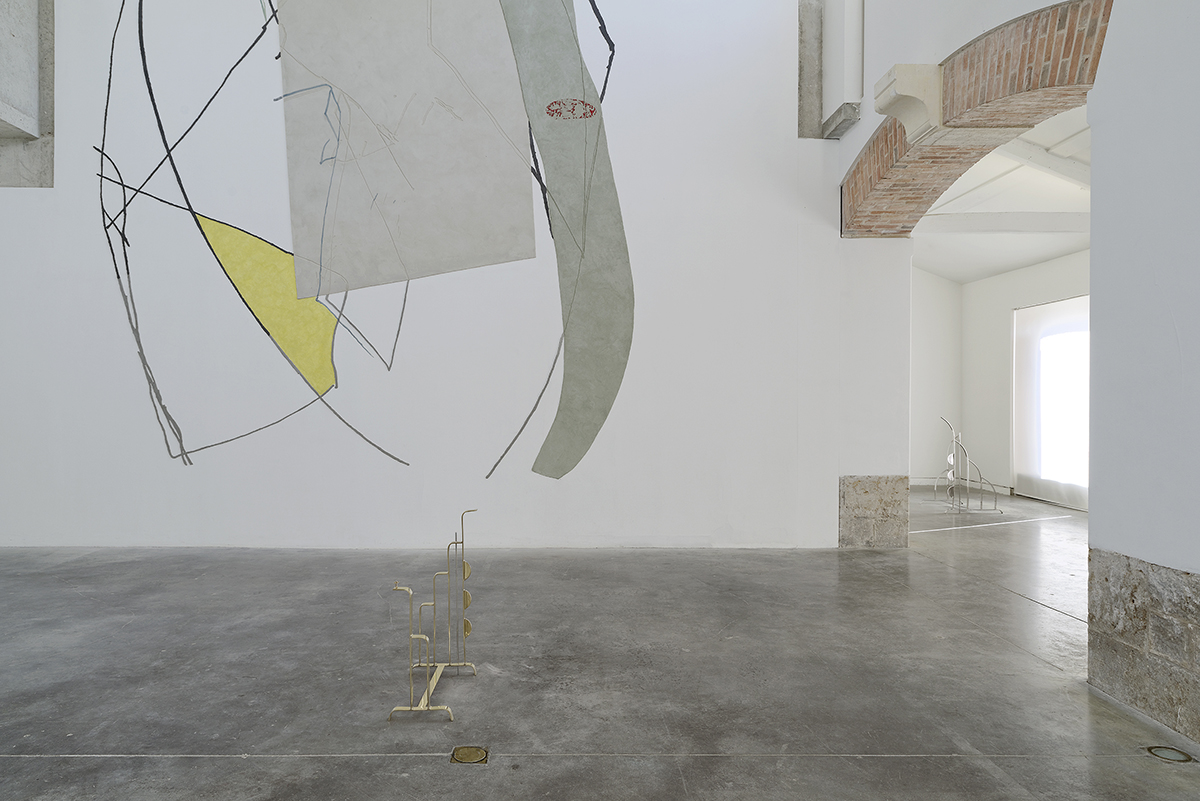 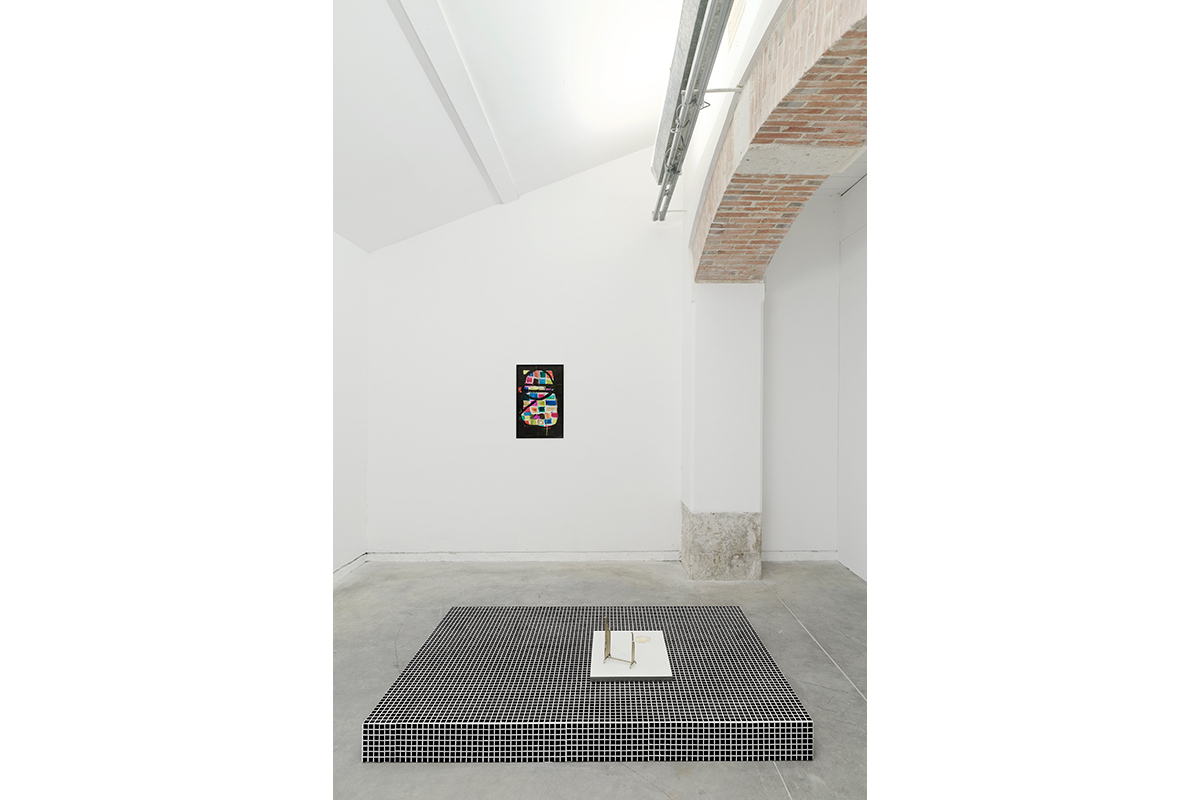 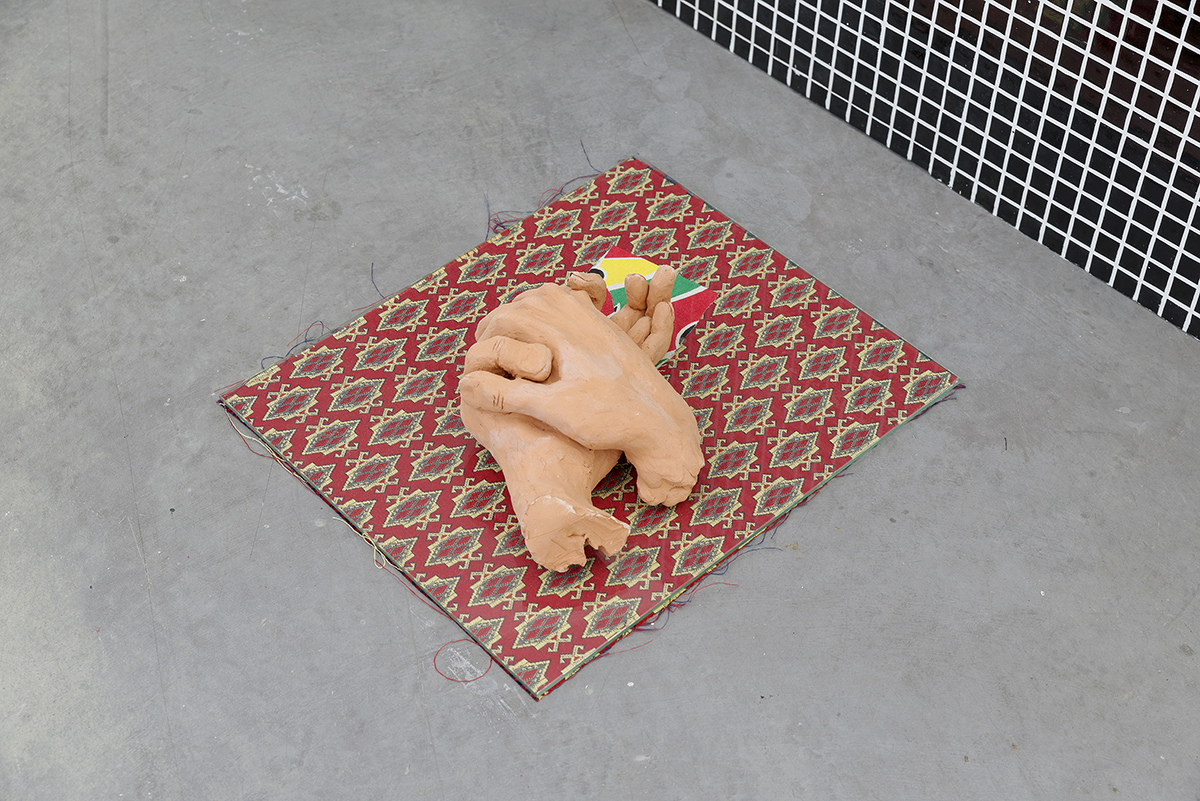 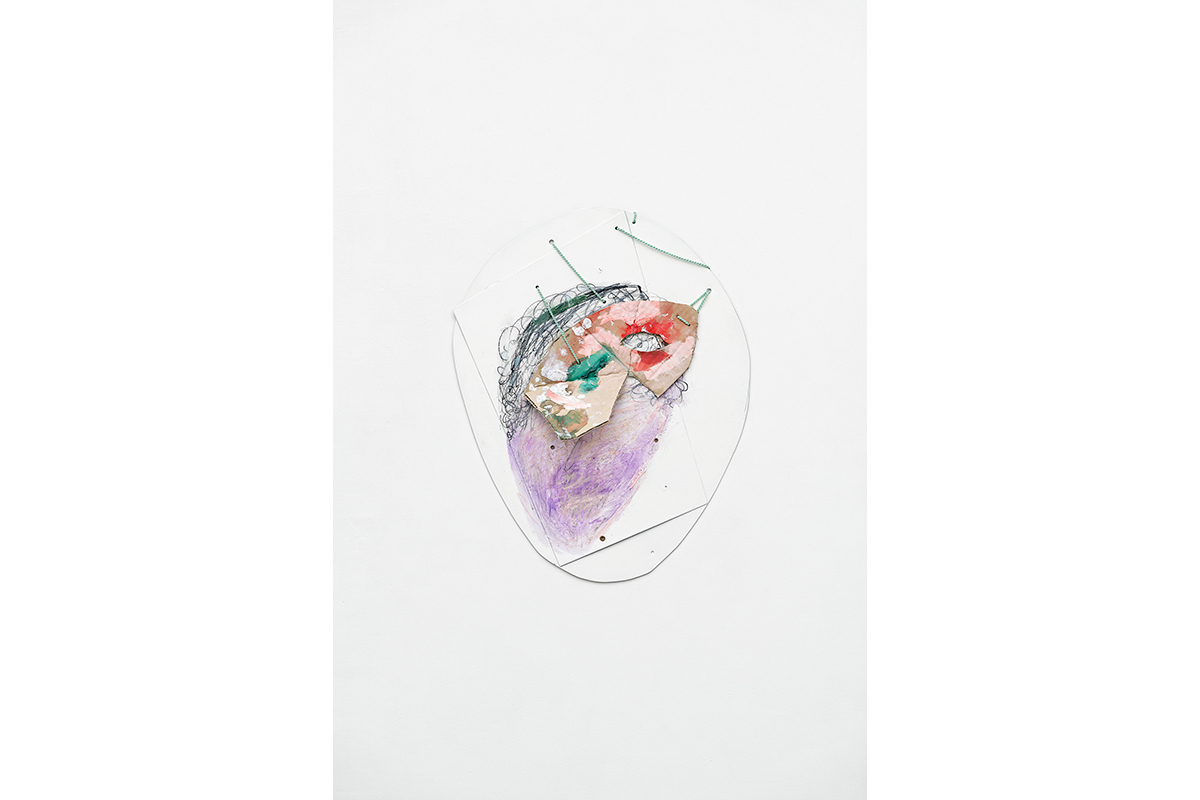 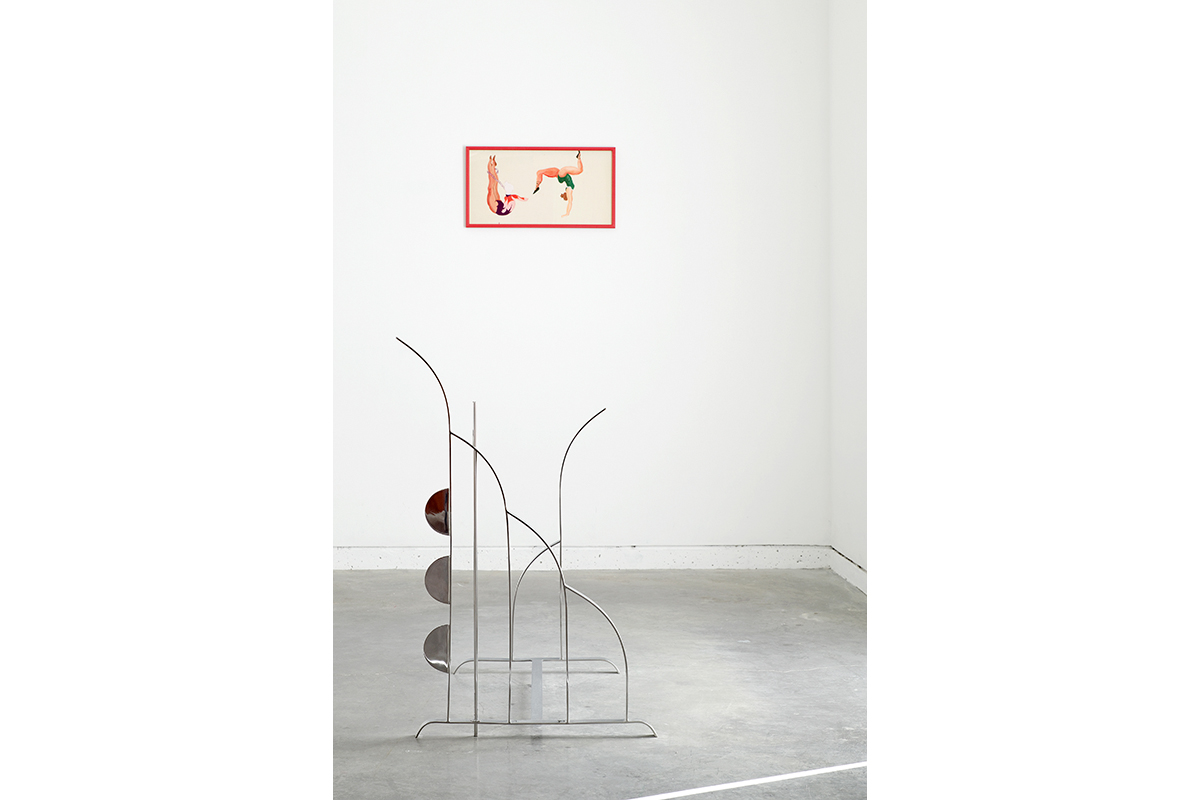 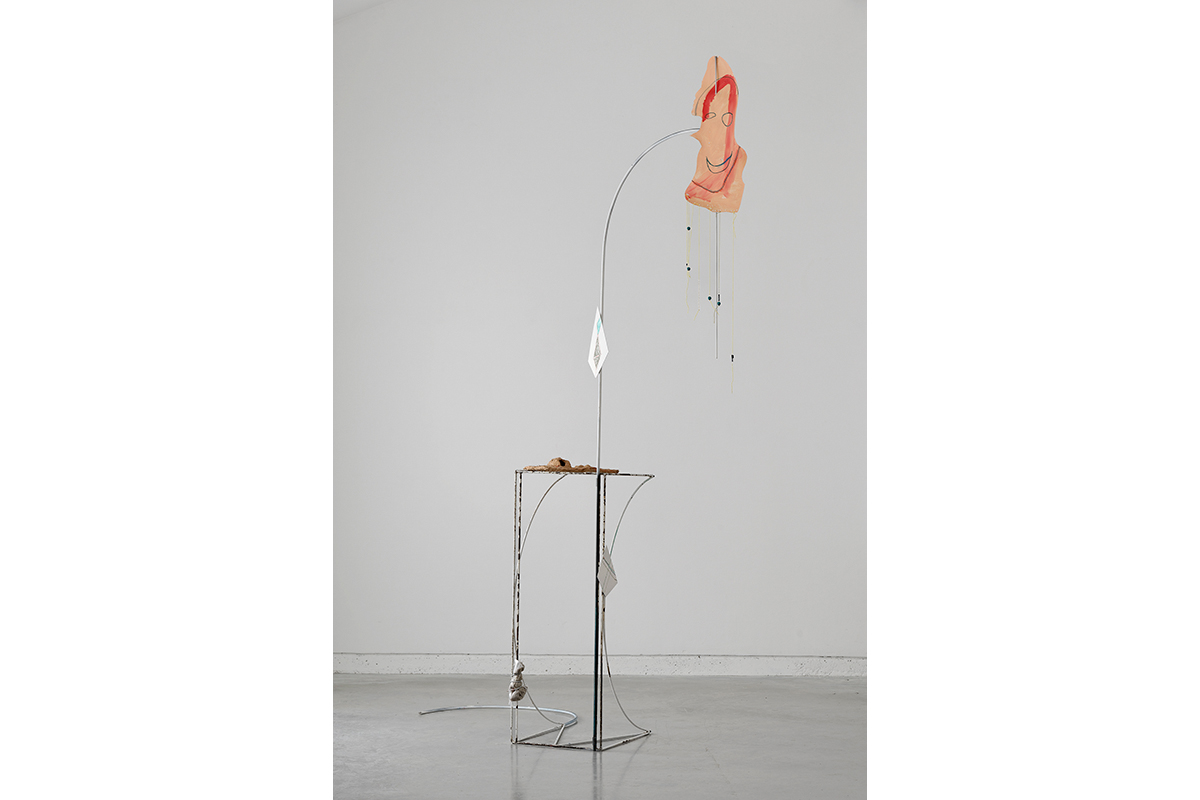 The Parc Saint Léger Centre d’Art Contemporain is pleased to announce a solo exhibition by Sarah Tritz, L’œuf et les sandales [The Egg and the Sandals], featuring a new collection of works created especially for the venue and the occasion. These recent pieces, moreover, are arranged alongside older work through an artistic practice that uses assemblage and composing—a composing of images, forms, sensations, and references that is entirely representative of Tritz’s approach in general.

The title of the show suggests an unexpected link—indeed, what does an egg have to do with sandals? Probably no more than an umbrella and a sewing machine on a dissection table.* The connection in fact brings to light the process that can be seen at work in Tritz’s art, in which combinations of disparate elements—combinations that are both familiar and strange—invite us to break free of static standardised forms, ideas and sensations. In Tritz’s work, abstraction is found right by guration, the Italian Renaissance rubs shoulders with American Minimalism, and the artist’s gesture exists side by side with the artisan’s, in one and the same burst of creative imagination. Objects that the artist comes across during her walks are displayed next to her sculptures, which are by turns meticulously wrought or hollowed out in an almost primitive gesture. Tritz’s repeated borrowings from artists she holds dear and studies—from Lucio Fontana and Piero della Francesca to Eva Hesse and Öyvind Fahlström—should not be seen as a play of references meant to demonstrate her erudition; on the contrary, they are a way for her to offer an exercise in taking a wholly personal look at these artists work which remains sceptical of normative categories. With Tritz there is an irrepressible desire to create forms that emerge from daily life and the dreams lling it, and from the needs of the body and its relationship to its surroundings, whether they are her studio, the street, or the pages of a book on Etruscan art.

Tritz sculpts, sketches, creates jewellery, and designs posters, but make no mistake, everything she does is a pretext for working with painting, its territory and the questions and themes it raises. As a reader of Fontana and his White Manifesto,** which states that “the canvas is not or no longer a support but an illusion,” Tritz is in her own way carrying out this shift of painting towards its environment. The painting acquires a connection to the space and architecture around it by way of sculpture; it escapes, leaves the frame, ees like a runaway teenage girl, alights on a low tiled wall one moment and in the next takes over a sculpture, adorning it like a precious ornament. The painting no longer exists solely for the observer’s gaze to lose itself in it, but rather is very much open to the accidents of its nonpictorial surroundings. In this way, the work invites viewers on a walk, a ânerie that engages the body as much as the imagination.

The question of the body, moreover, is indeed central to Tritz’s work. There is the viewer’s body, as we have seen, caught up, seduced, or disorientated by turns; and the artist’s body, suggested by the gestures and traces that Tritz poses here and there with each new installation, the way one might place a knickknack on a bookshelf according to one’s mood; and again the artist’s body, through the recurring image of the hand and foot, alluding to the outmoded practice of the nude, but also, more simply, to the pleasure of touch and making; and nally, the body of the sculptures, envisioned as gures, sculptures that are literally inhabited—by photos, knickknacks, jewellery, although they are peopled, too, with ghosts, those fellow artists haunting the works and sustaining them. Among the pieces featured in L’œuf et les sandales, Tritz presents a monumental anthropomorphic sculpture freely inspired by a drawing done by Antonin Artaud, Totem (1946). Artaud’s drawings grab hold of the space, projecting texts, objects and phantom beings onto the paper. The forms are brutal, the bodies roughed up, line is both clumsy and

surprisingly con dent, the paper is creased, soiled, and occasionally scratched to the point of being perforated, while gesture proves essential, symbolising a breathless life. Taking her inspiration from this impulse to live, a drive that is shouted rather that stated, Tritz offers us in a free association of ideas a half-man half-animal sculpture that seemingly acts like the protector of an indigenous tribe, the tribe of forms. This is perhaps the way visitors should approach L’œuf et les sandales. The show, in the artist’s own words, is “like a painting ripped apart and opened up to the space, embodied by volumes and surfaces, stocked with both anthropomorphic and abstract forms, and striving to preserve the permeability and shifts between these formal and psychological categories.”***

The French artist Sarah Tritz was born in 1980. She lives and works in Paris. A graduate of ENSBA in Lyon, she is represented in France by the Galerie Anne Barrault. Her work was recently shown at Artissima in Turin and in Berlin at the Florent Tosin Gallery, and was featured in solo exhibitions at CAP of St-Fons (2011), Lieu Commun in Toulouse (with Dominique Figarella), the Ecole Supérieure d’Art in Valenciennes (2010) and Bétonsalon (2008).