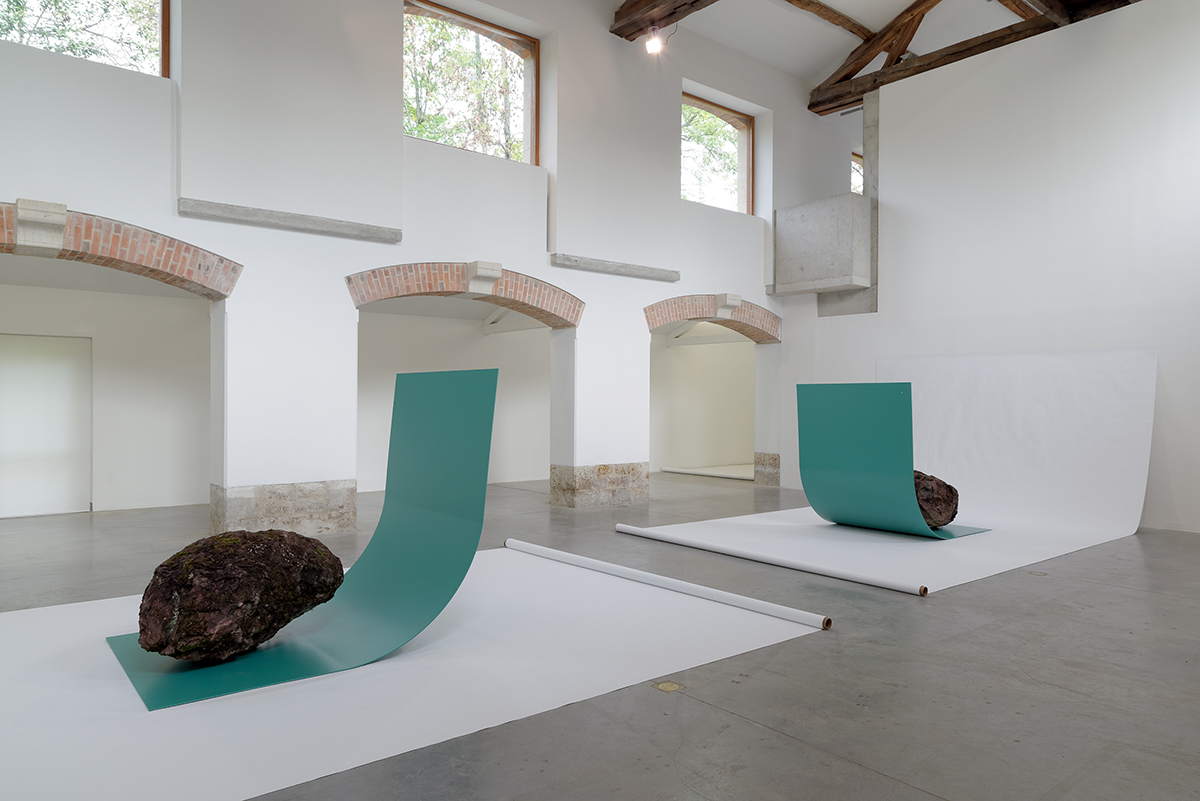 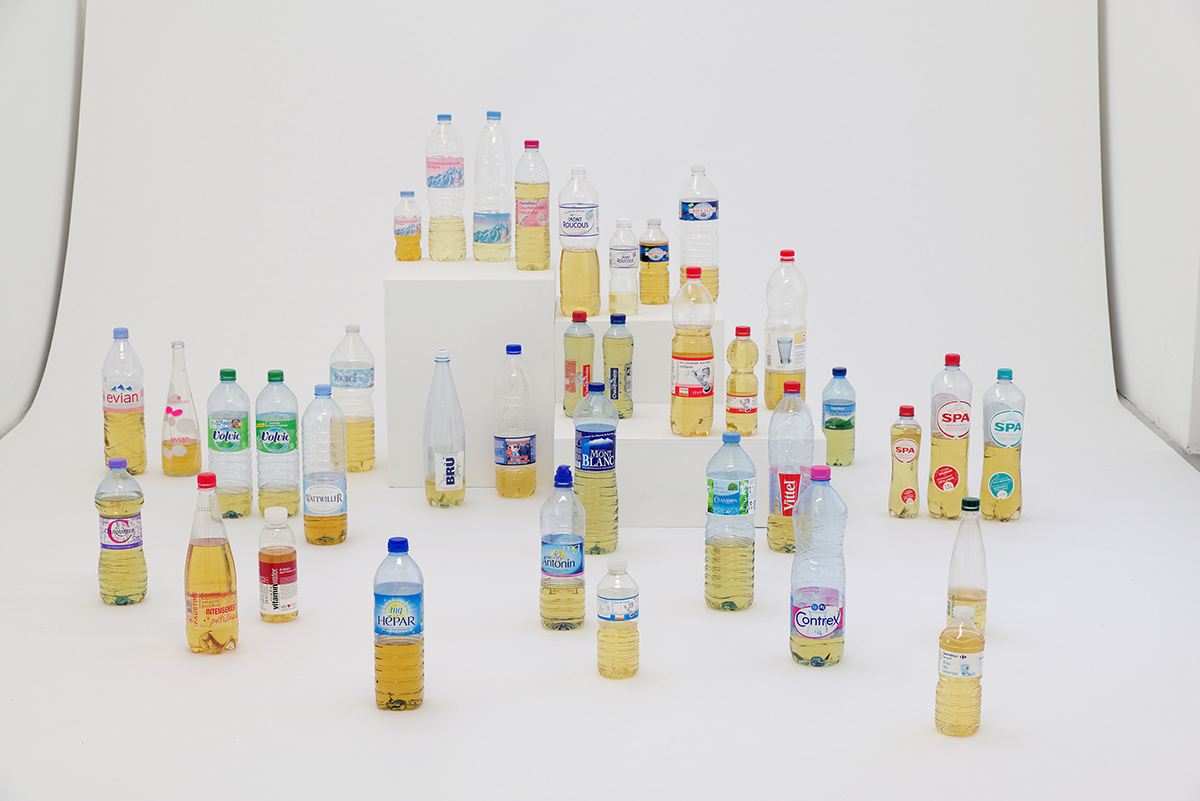 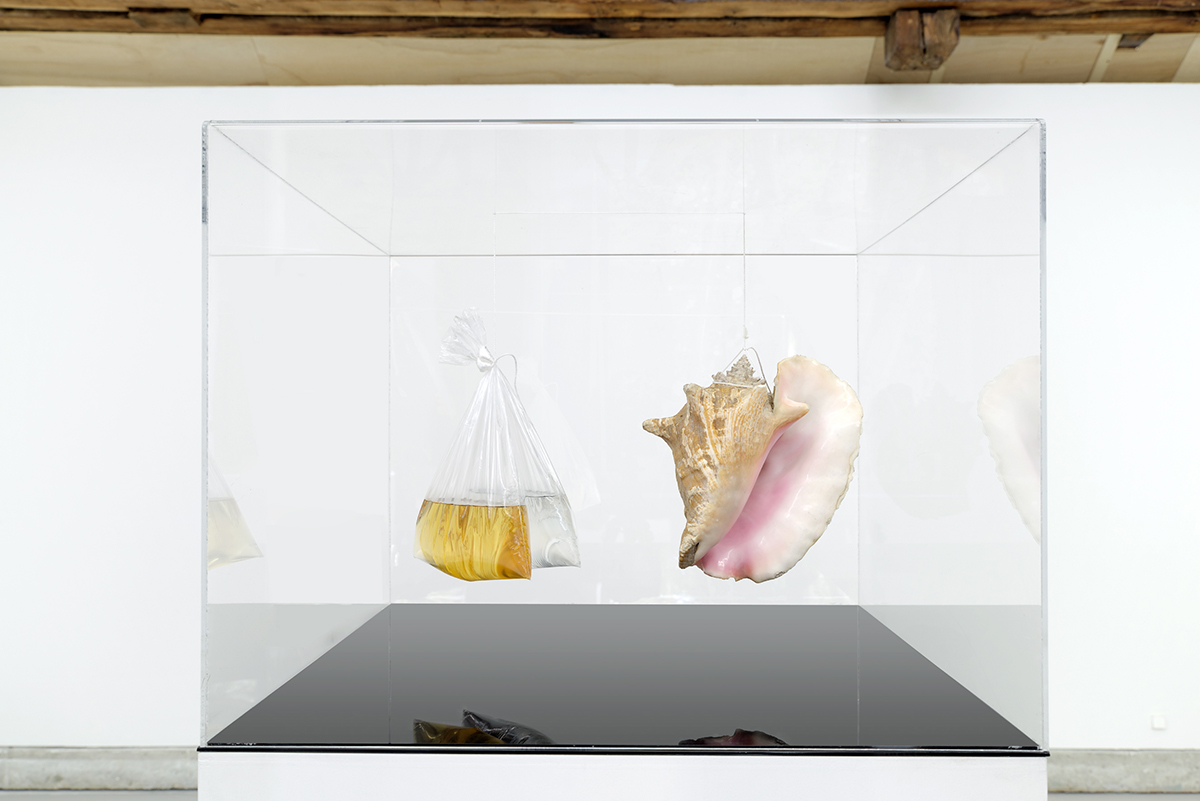 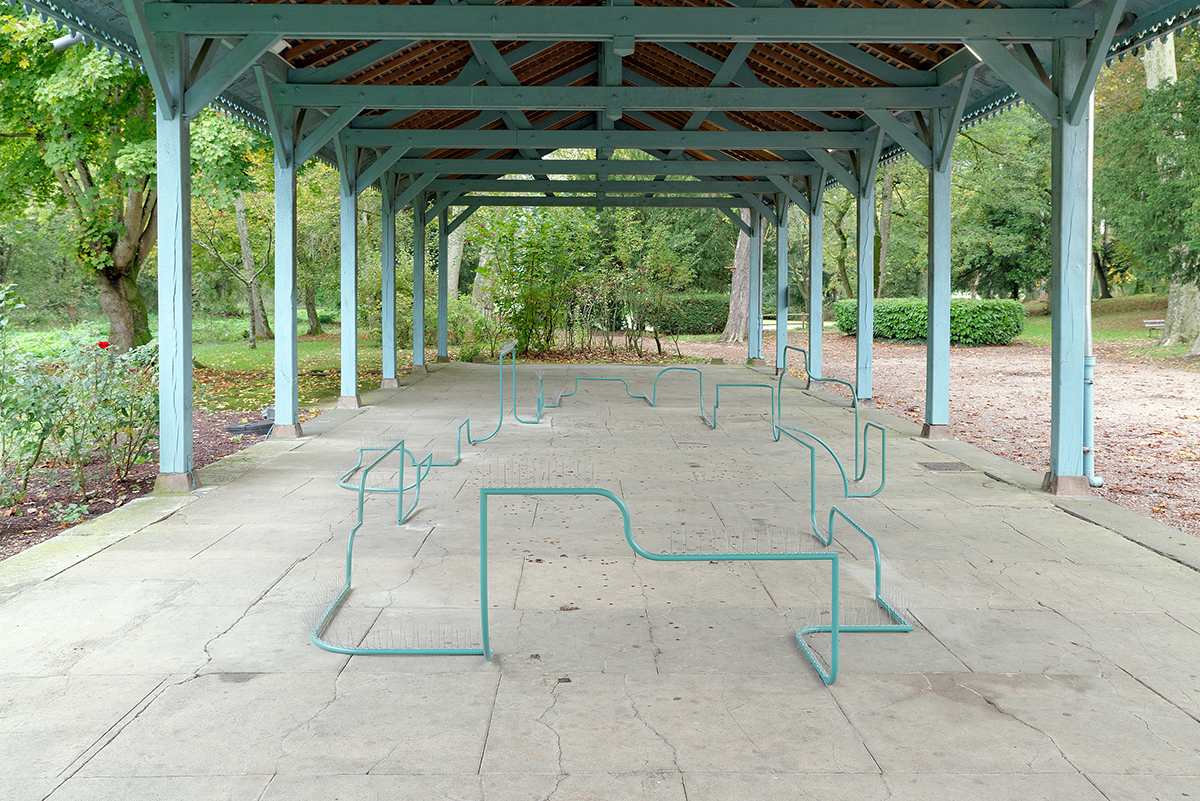 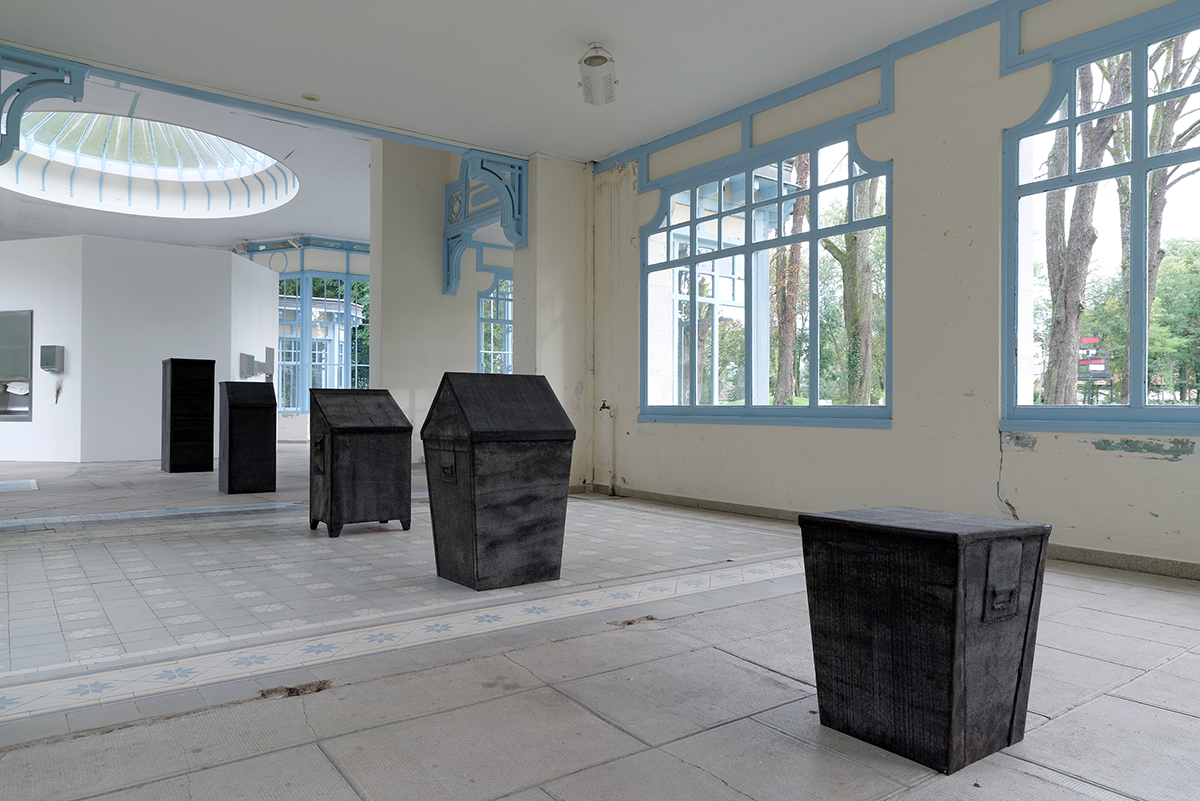 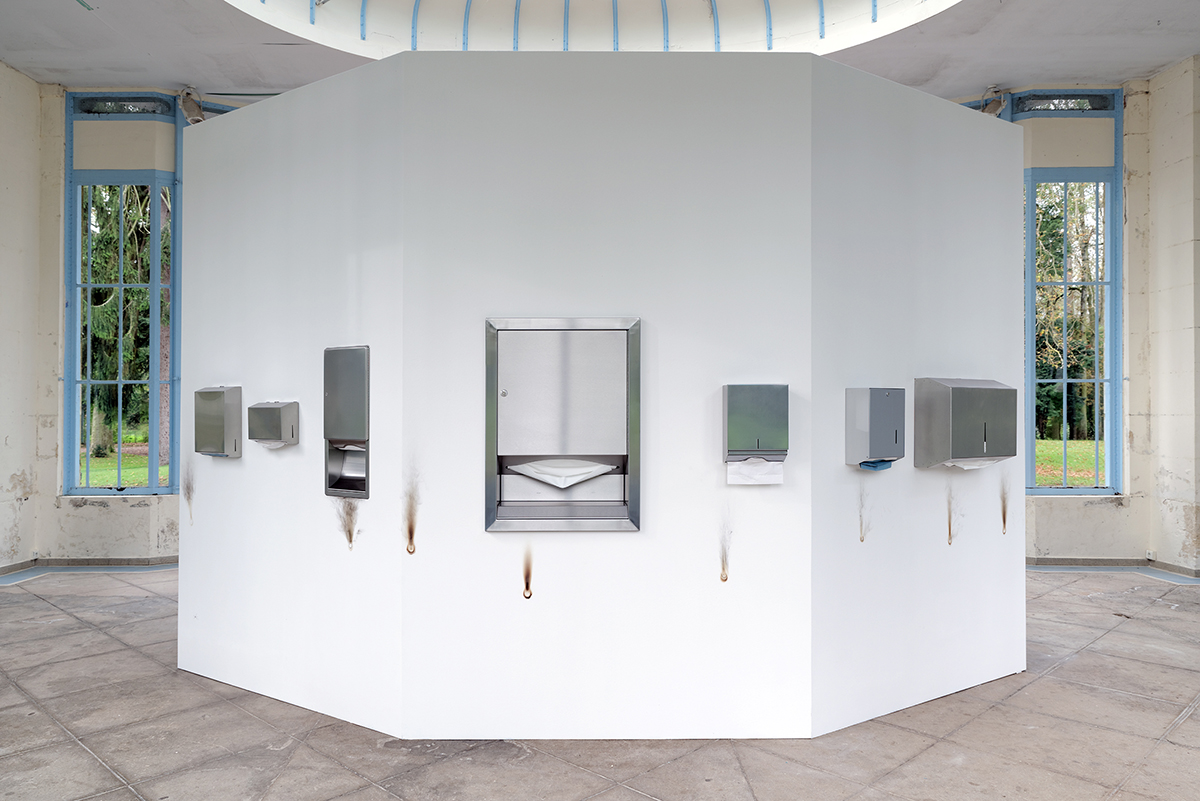 The work of Gabriel Kuri, a Mexican artist born in 1970, was discovered and celebrated within the framework of major international collective exhibitions (Venice Biennale in 2011, Berlin Biennale in 2008, Walker Art Center, Minneapolis, in 2007, New Museum in 2007) and many solo exhibitions have also been held throughout the world (Kunstverein Freiburg and Bielefelder Kunstverein in Germany, Museion de Bolzano in Italy, Blaffer Art Museum in the USA).

At the Parc Saint Léger, Gabriel Kuri presents a significant new collection of sculptures entirely designed for the space and shown in various locations on site.

Despite the fact that his work occasionally takes the form of text, collage or photography, everything in Gabriel Kuri’s work reflects sculptural research – the formal and conceptual possibilities of sculpture – in a fascinating to-and-fro between the abstractions of forms, the codifications connected to them and their potential uses.

His plastic vocabulary combines ‘traditional’ materials of sculpture (marble, metal, stone) with common elements used in construction (insulation panels, cement, cartons) that objects from everyday life are often grafted to in unexpected ways (plastic bags, cigarette butts, receipts, cans). The constant presence of these decontextualised elements from our everyday lives gives rise to semantic connections between existing forms and their uses, in today’s globalised context where overconsumption reigns. Parking tickets and cigarette butts delicately imbricated into sober formal sculptures that play on the codes of minimalism thus appear to contaminate the entire sculpture and brand it with its status as a consumer item. For Gabriel Kuri, “objects” must be understood to refer to both the set of objects produced by our society, but also the totality of the objects “produced” by nature. Thus all objects are potentially sculpture, and their evocative power as sculpture is amplified and greatly increased by the field of reference that constitutes their biotope.

Through a series of oppositions regarding consumerism and globalisation, Gabriel Kuri develops a critique that is devoid of moral lessons but full of humour and poetry. His critique is both social and political, regarding our lifestyles and production processes. By confronting both the forms stemming from art history and ordinary forms, Gabriel Kuri thus offers us a broader conception of sculpture, in which the objects from everyday life fully participate in the aesthetic experience.

The exhibition bottled water branded water takes the site of the Parc Saint Léger and its history as its starting point. Based on his relationship to everyday objects, Gabriel Kuri considers the site like a given situation, with its specific component parts, whether these are spatial, economic or cultural. The title of the exhibition makes reference to the economic activity that brought life to the centre up until the 1970s – that of a thermal spa that provided a series of playful and commercial activities on site. As the neologism of the title suggests, the exhibition implicitly

evokes the commercialisation of water, the natural resource that is vital for the survival of humanity, which nonetheless does not escape from marketing logics.

In this context, the artist presents us with a new series of sculptures that wend a casual path between interior and exterior spaces, both within the exhibition space but also in two sets of architectural ruins from the thermal era: the Pavillon des Sources and the Promenoir.

Under the Promenoir, Kuri has installed a tubular metal sculpture that is deployed over twenty metres, with a myriad of twists and turns, in a long curvaceous line. These gentle shapes contrast with the harshness of the anti-pigeon spikes covering it, while small coins – humorously suggestive of wishing wells – echo the site’s thermal past.

In the Pavillon des Sources, an architecture typical of the late 19th century that served as a stall for selling the water and its derived products, Kuri presents a set of sculptures, either office furniture (photocopier, storage closets, folders) covered in layers of tar as though with a second skin. The result is disturbing in a plastic sense, since it is both evocative – the shapes are recognisable – yet strangely mutable. What these objects lose in terms of functionality, the sculptor’s action allows them to gain in formal and plastic qualities. Adjacent to this ensemble, a series of chrome paper-serviette distributors completes the set.

Within the exhibition space itself, Gabriel Kuri orchestrates the layout of the objects and sculptures presented against paper backdrops, as though the installation as a whole was waiting to be photographed for promotion in a lifestyle magazine.

Finally, as an extension of the exhibition, Gabriel Kuri will provide the visitor with a publication, a repertoire of images of various French brands of mineral water, photographed like commercial products, but with their bottles filled with a less than inviting yellowish liquid, a thinly disguised metaphor for the economic stakes hidden behind the commercialisation of our vital resources.

All of these interventions will allow the visitor to be immersed in an experience that is both sensorial and conceptual, on a journey to the heart of sculpture and its potential.